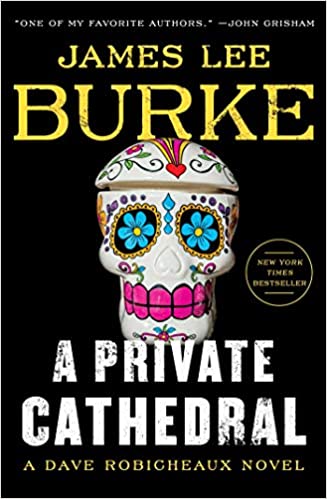 In his 40th novel, legendary storyteller James Lee Burke showcases all of the things that have seen him called not only the greatest living crime writer, but America’s best novelist over the decades. A Private Cathedral, the 23rd novel featuring Louisiana sleuth Dave Robicheaux, is a heady gumbo of crime and violence, tattered souls, addiction, sticky landscapes, lyrical prose, and battles between good and evil that go far beyond a few cases or time periods. It’s bayou noir dosed with magic realism.

In the days before 9/11, Robicheaux is on the way to visit a prisoner in Huntsville, Alabama, when he comes across a pair of star-crossed lovers whose lives are tainted by a centuries-old feud. Johnny Shondell is a teenage heartthrob singer. His girlfriend Isolde Balangie is also a singer, but has now been promised to Johnny’s elderly uncle as a peace offering between Louisiana’s crime families. It’s like a modern-day Romeo and Juliet, if the Capulets sex-trafficked Juliet to the Montagues.

Helping the young couple on the run, Robicheaux and his pal Clete Purcel pop the top off Pandora’s box and get entwined with some exceptionally dangerous people, including a specter that has been killing for centuries but is far more complex than just a malevolent assassin. Are Dave and Clete among the doomed and the damned?

It’s hard to do justice to the richness and complexities of Burke’s storytelling in a short review. There’s so much going on in his crime novels, which blend violence and tenderness, philosophy and mythology, and meld exquisite regional detail with huge questions about life, the world, and beyond.

A Private Cathedral in some ways feels like a sort of culmination of a lot of what’s gone before in the Robicheaux series (even if it goes back in time chronologically), taken to a dizzying new level. It’s both a brilliant book and perhaps not the best one for readers new to Burke to start with.

Burke has provided plenty of evidence over the decades to bolster claims he’s our greatest living crime writer, and here he unleashes his formidable powers even more widely, blending a variety of genres into a profound and masterful story. If you’re new to Burke, visit with a few of his past Robicheaux tales before reading this one. For those who’ve regularly ridden with the Cajun cop, settle in and savor.