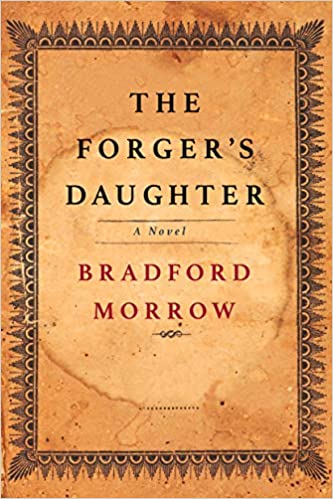 Bradford Morrow’s The Forger’s Daughter brings back the characters and the underworld of literary forgery introduced in his 2014 novel, The Forgers. Will, a mostly reformed top-shelf forger (or mimic, as he calls himself), and his wife of two decades, Meghan, are spending their summer in upstate New York’s Hudson Valley. Their peace is shattered when their adopted daughter, Maisie, is frightened by a man with an uncanny resemblance to Meghan’s murdered brother. The man gives Maisie a letter addressed to Will.

The letter is written in Edgar Allan Poe’s distinctive hand, but Will knows who the letter’s true author is—Henry Slader. Slader attacked Will years earlier in Ireland, chopping a finger from his right hand. Now, Slader wants Will to forge the rarest of American literary pamphlets, Poe’s Tamerlane. It is a task that both attracts and repels Will, but he grudgingly agrees when Slader threatens to reveal evidence that would send Will to prison for a past crime.

The Forger’s Daughter is a beautifully executed whodunit, but its true power is its insight into the dark world of forgery and backroom book dealing. The page-by-page and line-by-line description of Will’s forgery of Tamerlane is fascinating. The inside details of forgery—what causes suspicion of a letter, a signature, a book—is, for any booklover, a marvelous and harrowing experience.

The plot is exceptional. The pacing is perfect. The intrigue—what Henry Slader has over Will is but one element—dovetails into a perfect fit with the novel’s narrative momentum. The Forger’s Daughter is a wonderful bibliomystery that every booklover will delight in reading.