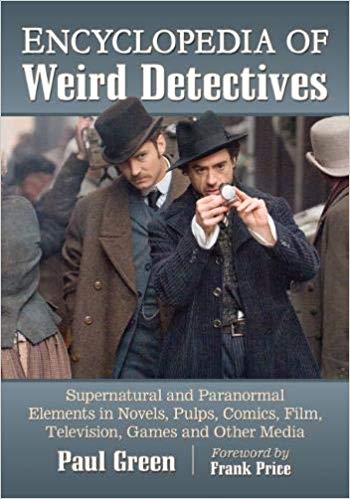 Per the author’s preface, “I have concentrated on supernatural and paranormal detectives. Science fiction detectives in general are outside the scope of the book, although the supernatural and science fiction genres do occasionally cross paths.” Media explored include animation, audio drama, radio drama, stage plays, graphic novels, juvenile books, video games (lots!), and film serials along with those enumerated in the subtitle. Among the familiar literary characters encountered: Randall Garrett’s Lord Darcy, Edward D. Hoch’s Simon Ark, Earl Derr Biggers’ Charlie Chan (three films, only one of which has unexplained paranormal elements), Ralph McInerny’s Father Dowling (several episodes of the TV series), James Lee Burke’s Dave Robicheaux (In the Electric Mist With Confederate Dead), Algernon Blackwood’s John Silence, Seabury Quinn’s Jules de Grandin, Joseph Payne Brennan’s Lucius Leffing, and William Hope Hodgson’s Carnacki the Ghost-Finder. While some (I) would prefer to find fictional characters listed under their last rather than first names (who would remember Carnacki’s first name was Thomas?), there is precedent for that style of listing. Many TV series are covered in season by season listings, notably Buffy the Vampire Slayer. This is a great browsing book, full of fascinating stuff, but frustrating as a reference book because it is clearly not comprehensive (given the scope of the coverage, how could it be?) and has some oddities of selection and arrangement. Some entries include seemingly occult elements rationally explained (e.g., The Hound of the Baskervilles). If these qualify, why not more non-occult detective stories by authors like John Dickson Carr? In the coverage of motion pictures, a couple of notable omissions are Dead Again and What Lies Beneath.