Books
The Tower of Songs 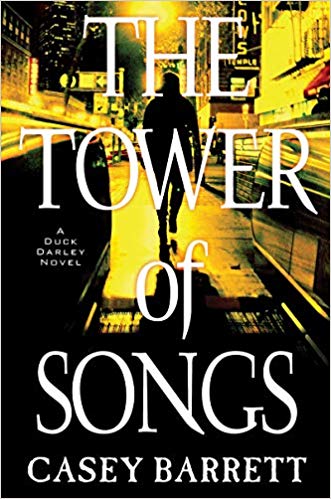 Scrape away the high drama and there’s a solid story underneath, grounded by some sharp characterization, particularly of Duck himself. A former competitive swimmer, exfelon, and a recovering alcoholic who currently self-medicates by vaping pot and attending AA meetings, he has the kind of beat-up, hinted-at backstory that could make firsttime readers stumble. Fortunately, Barrett knows how to tease, not trip.

The story opens with a bang— a prologue that actually works, featuring a crime in the clouds: the almost Bond-like kidnapping of zillionaire Daniel Soto from his sky-high Manhattan penthouse (“the highest apartment in the world”). But chapter one snaps us back to street level with Duck being tossed around a mat by a “beefy, young cop” at his local aikido dojo on a hot, sticky summer day in the city. “The beating felt good,” he confesses, “just what I needed.”

What he might not have needed was Daniel’s daughter, 17-year-old Layla, showing up. She’s convinced only Duck can rescue her father, thanks to the glowing recommendation of a classmate’s mother. She hands Duck a bag of cash to seal the deal. Nonplussed, Duck insists on meeting her mother.

And then we’re off to the races. Nicole Soto is a pillhead barely keeping it together, but agrees to let Duck proceed. But the Soto’s security chief, when questioned, threatens Duck, and then somebody else slips him an almost-fatal dose, landing him in the hospital (complete with a welcome poke at health care—who does pay for private eye boo-boos?).

Sure, all that heavy breathing is enjoyable enough. But unnecessary, given how taken I was with Duck and Cass.

MysteryScene Put your sleuthing cap on with ‘Enola Holmes’ and these 8 other Sherlock adaptations https://t.co/QlofEzQ6ts
4h • reply • retweet • favorite