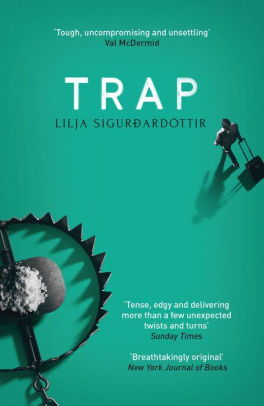 Nordic noir has been around for more than 50 years, though its global profile has skyrocketed in the last decade. A side effect of the Scandi crime wave phenomena is that many readers and critics talk about crime tales from the multinational region as if they were some kind of homogeneous offering of bleak landscapes, brooding detectives, and socially conscious crime, when in truth, there’s a huge variety of styles, settings, and stories told. Award-winning Icelandic author Lilja Sigurdardóttir is a terrific example.

The second in her Reykjavik Noir trilogy following Snare, the book Trap is an edgy tale of international drug running and financial crimes centered on a cast of rather unlikable but fascinating miscreants with nary a pensive alcoholic copper in sight. Sonja, a former drug smuggler, is now living (hiding) in Florida with her son Tomas, only to be hauled back to Iceland when he’s snatched. Maneuvering between a scheming ex-husband, her lesbian lover who’s awaiting sentence for financial misconduct, and some vicious drug lords, Sonja turns to a former nemesis, customs officer Bragi, for help. Desperate and in debt, Trap is about how far a woman will go to get her son back and start anew.

Sigurdardóttir delivers a slick tale imbued with substance. In a way, Trap leans to noir in its truer sense (rather than the synonym for any crime writing it’s become in recent years). Many characters are cynical or fatalistic, there’s lots of moral ambiguity. There are nasty deeds and nasty people. This contributes to a sense of freshness and fascination, while also creating a bit of a buffer: at times I found myself admiring the storytelling more than being enveloped. Perhaps because I wasn’t particularly onside with any of the characters—more just witnessing the traps set and the carnage unfold. But it is delicious carnage.

A pacy, tense read with an underlying layer of humanity and the messiness of life.

MysteryScene RT @nytimes: Steve McQueen’s “hero car” from the movie “Bullitt" is heading to auction, and its own figures the price could approach $5 mil…
Jan 11 • reply • retweet • favorite