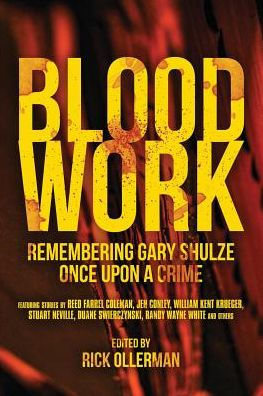 Blood Work, edited by Rick Ollerman, is a large anthology, featuring 30 mostly original tales—a couple aren’t purely original to the anthology, including an essay written by Randy Wayne White for his “Out There” column in Outside magazine—that, with a few exceptions, are among the best examples the genre has to offer. As Ollerman explains in his introduction, Blood Work is a memoriam honoring the late Gary Shulze, who, along with his wife Pat, owned Minneapolis’ famed Once Upon a Crime mystery bookstore. The book’s proceeds—“no one...is making a penny from it”—are going to Memorial Blood Centers of St. Paul, Minnesota.

Libby Fischer Hellmann’s “Undeliverable” is a tantalizing and twisty tale of love, murder, and, rather than getting what you want, getting what you deserve—delivered with wit, style, and a sly metaphorical grin. “Faith,” by Stuart Neville, featuring a faithless priest and a painfully crippled and disfigured police officer, has a noir soul with lyrical prose and enough irony for any two tales. William Kent Krueger’s “Just Another Cold Case” is a clever procedural with a perfectly devised twist, and a mesmerizing, haunting, final sentence. My favorite story in the anthology, from a writer who is quickly becoming a personal favorite, is “Melanie” by Jen Conley. A stalking story that is more about people and memory than it is about the simple act of stalking, it teems with the same emotional intelligence that has made Joyce Carol Oates famous, but with a style and voice all its own.