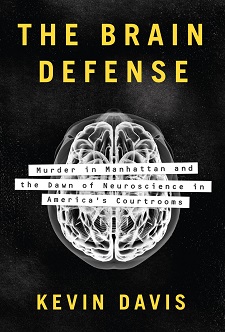 Normally, I don’t read true crime books, but recently two crossed my desk that I could not pass up. Both books pulled me in with their strong narrative and meticulous research.

Today, I am focusing on one of those books.

What makes Davis’ book so absorbing is it takes the reader on journey that shows us how neuroscience intersected with criminal justice, setting a new standard in courtrooms and the law.

Davis’ story starts with the 1991 death of Barbara Weinstein, whose body fell from a 12th-story apartment on Manhattan’s East 72nd Street. The 56-year-old woman’s husband, Herbert, soon confessed to the police that he had hit his wife and then strangled her after an argument. He threw her body out of the apartment window to make her death appear to be a suicide.

Nothing in the case added up. The 65-year-old Herbert Weinstein was a quiet retired advertising executive. He didn’t have a criminal record, no history of violent behavior. He apparently didn’t even have a temper.

What made him snap?

After he was arrested, an MRI revealed a cyst the size of an orange on his brain’s frontal lobe. That’s the part of the brain that governs judgment and impulse control. 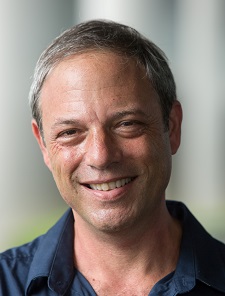 Could Weinstein’s brain have been broken, causing him to do something totally out of character?

Weinstein’s lawyer argued that the cyst had impaired Weinstein’s judgment and that he should not be held criminally responsible for the murder.

This became the first case in the United States in which a judge allowed a scan showing a defendant’s brain activity to be admitted as evidence to support a claim of innocence.

The Weinstein case ushered in a sea change in American courtrooms, as Davis shows. It wasn’t just a matter of one man’s medical issues. The ruling raised complicated questions about responsibility, free will, and how science affects moral questions.

Full disclosure—I worked with Kevin Davis, right, years ago at the Sun Sentinel in Fort Lauderdale. He quickly became known as one of the best reporters the newspaper had. Since he left the Sun Sentinel, his reporting has appeared in a number of high-profile newspapers and magazines. He also is the author of Defending the Damned and The Wrong Man.

Davis meets the high standards I expect from him in The Brain Defense.

He doesn’t focus on the lurid details of Weinstein’s case but puts this crime and its ruling in context. Davis looks at a broader history of brain problems, from the bizarre stories of Phineas Gage, history’s most famous brain-injury survivor, and Charles Whitman, perpetrator of the 1966 Texas Tower massacre, to the role that brain damage may play in violent actions by football players and war veterans.

Davis also looks at how criminal lawyers continue to turn to neuroscience and the effects of brain injuries in determining guilt or innocence.

The Brain Defense: Murder in Manhattan and the Dawn of Neuroscience in America's Courtrooms is a fascinating read. Like any good book, the characters—who happen to be real people—are well explored. And the plot—which is all reality—is the stuff of an absorbing legal thriller.