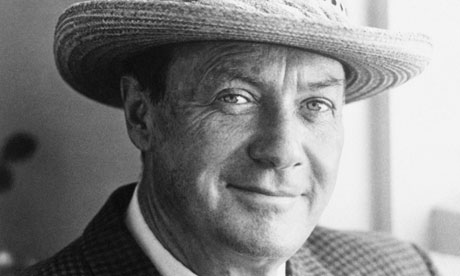 Ross Macdonald's Lew Archer debuted in the 1949 novel The Moving Target and has appeared in novels, radio programs, and on the screen over the decades since.

In The Archer Files (Vintage Crime, softcover, $16) a collection of the complete short stories featuring private detective Lew Archer, its editor Tom Nolan provides a detailed biography of the Southern California sleuth culled from clues planted by author Ross Macdonald in the stories and 18 acclaimed novels. 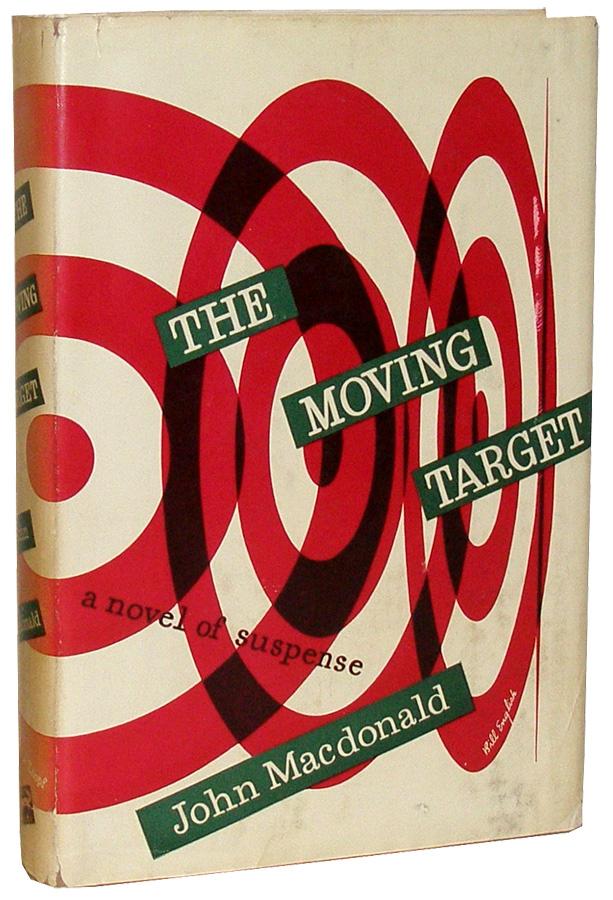 A while later, the story would be reprinted with Archer replacing Rogers. But the character’s official debut was in 1949’s The Moving Target when, at 35 and in the midst of a divorce, the character is summoned to Santa Teresa (the author’s fictional version of Santa Barbara) and the home of wealthy and unpleasant Elaine Sampson who hires him to find her missing alcoholic husband. The novel was clearly influenced by Raymond Chandler’s work, with several obvious nods to Chandler’s first Philip Marlowe novel The Big Sleep.

But by 1956’s The Barbarous Coast, Macdonald and Archer were leaving many of the hardboiled tropes behind, replaced by, as Nolan puts it in his excellent, meticulously detailed biography, Ross Macdonald (Scribner ebook, $12.99), “more subjective themes: personal identity, the family secret, the childhood trauma . . . how the buried past rises like a skeleton to confront the present.” The Galton Case (1959), with its debt to the Oedipus myth, is usually cited as the upward turning point in Macdonald’s creativity, to be followed by a series of remarkable novels ending with The Blue Hammer (1976).

AUDIOBOOKS
As best I can tell, the first audio versions of the Archer series were Random House cassettes, narrated by Peter Riegert (Crossing Delancey, The Sopranos) who hurried the prose a little too much. The real problem with the productions is that they were abridgments, making their unavailability no great loss. Fans should be much more satisfied by the recent release of over a dozen Archer audios by Blackstone Audio (unabridged, on CDs or downloadable via Audible, priced variably). Included are the key novels, The Moving Target, The Ivory Grin, The Barbarous Coast, The Galton Case, the disturbingly creepy The Wycherly Woman, The Chill and The Underground Man, as well as a personal favorite, The Zebra Striped Hearse, with its memorable characters, including a ubiquitous gang of surfer kids and an overall sad Sixties vibe. Adding to the pleasures of Macdonald’s prose is actor Grover Gardner’s interpretation of first-person narrator Archer – relentless, empathic but tough when it’s necessary, well-spoken, the kind of guy who, though his occupation demands a certain physical prowess, sounds as if he finds time to read a book every now and then. 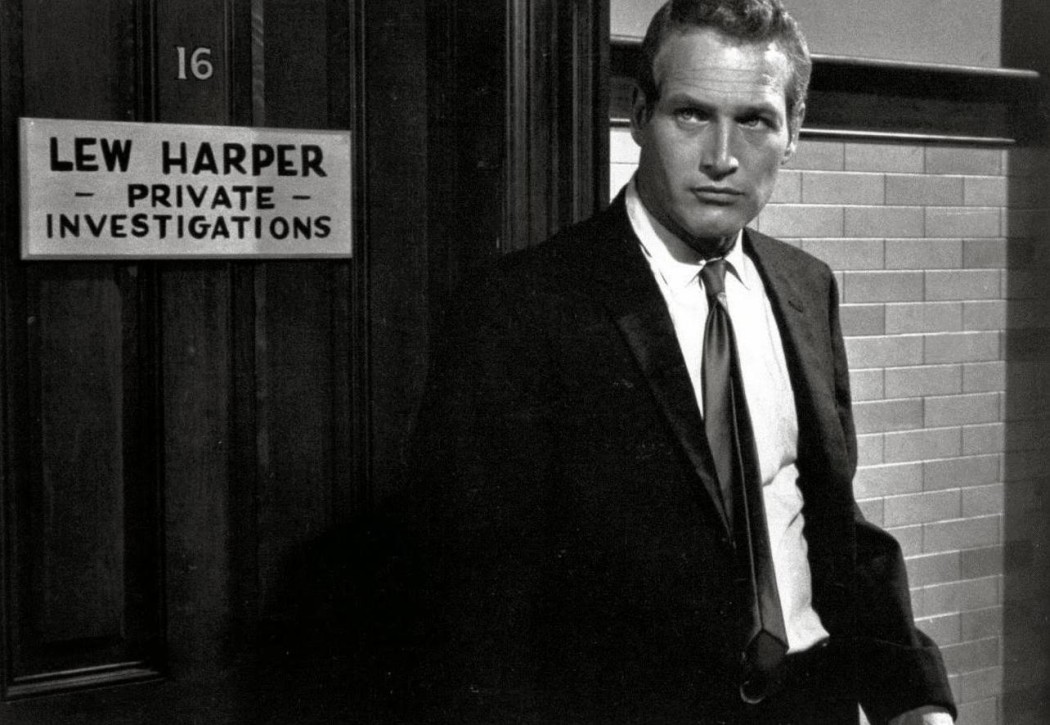 In the mid '60s, novelist and screenwriter William Goldman convinced producer Elliot Kastner to bring a Macdonald novel to the screen. Harper (1966), based on The Moving Target, starred Paul Newman as hero Lew Harper. The name change, long rumored to be because of the actor’s fondness for “H” titled-movies (Hud, Hombre), actually was due to Macdonald’s desire to retain the rights to the name “Lew Archer.”

The Drowning Pool (1975), based on Macdonald’s novel of the same name, also starred Newman, with its location changed from Southern California to New Orleans and the Gulf Coast. Though well acted (especially by Anthony Franciosa as a cop with a spot-on New Orleans accent and Murray Hamilton as a smiling bayou crime lord), it suffers by comparison with Harper, scriptwise and because of its unsubtle and at times unpleasant directorial excesses. Still, it has its moments.

Both films are available on Warner Bros. DVDs, at various prices.

The author has influenced many movies and TV series, but Twilight (1998; Paramount DVD, various prices) is the best Ross Macdonald film not based on anything the author wrote. Director Robert Benton and screenwriter Richard Russo created the ultimate Macdonald homage—a tough but wistful study of friendship, loyalty, and murder with Paul Newman as a retired Archer-like thoughtful private eye, living on the estate of his similarly aging actor friends, Gene Hackman and Susan Sarandon, and their troublesome daughter Reese Witherspoon. With an impeccable supporting cast that includes James Garner, Giancarlo Esposito, Liev Schreiber, Margo Martindale and M. Emmet Walsh—a noir dream team.

In 2011, Deadline Hollywood announced that producer Joel Silver would partner with Random House Films in launching a Lew Archer movie series, beginning with The Galton Case. In 2015, Variety stated that Silver and Warner Bros. were planning an adaptation of Macdonald’s Black Money, which Joel and Ethan Coen would write and “possibly” direct. The Guardian, this past January, noted that the brothers’ next project would be writing and directing a Western anthology for television, The Ballad of Buster Scruggs. No upcoming Macdonald project is listed on Joel Silver’s page on the Internet Movie Data Base (IMDB).

RADIO
In 1996, Santa Monica FM station KCRW broadcast a 7½ hour adaptation of Macdonald’s Sleeping Beauty, enacted by a cast of 40, including its director Harris Yulin as Archer, Ed Asner, Tyne Daly, Shirley Knight, and Jennifer Tilly. This was followed in 2000 by a similarly timed adaptation of The Zebra Striped Hearse, with Yulin again directing and appearing as Archer, backed by another big cast including Stacy Keach, Marian Mercer, Anthony Zerbe, and Pamela Reed.

Both excellent productions were released in 6-cassette packages from Audio Partners but apparently are only available as bootleg copies.

TELEVISION
In 1958, Macdonald’s short story Find the Woman was adapted as a 60-minute addition to the CBS anthology series Pursuit, retitled Epitaph for a Golden Girl. Michael Rennie portrayed the private eye who, at the author’s insistence, was re-christened with his original name of Joe Rogers.

In 1974, NBC-TV televised a two-hour pilot based on The Underground Man, with Peter Graves as a passable Archer, though a bit more nostalgic than his literary counterpart. According to Nolan’s biography, the author found Douglas Heyes’ adaptation “rather obscure and hysterical.” But over 12 million viewers seemed to like it, enough for a series to follow, albeit with a different crew and cast. Not that it helped.

Archer (NBC-TV, 1975) featured a glum, mumbling Brian Keith as Lew Archer. Produced by David Karp, and written by Karp and assorted others, the stories, as I remember them, weren’t just noir but rather sour studies of crime and criminals. It was canceled after six episodes. Variety called it “one of the speediest executions on record.” Still, one can’t help being curious about the episode The Body Beautiful, which was penned by Leigh Brackett, the near legendary screenwriter who co-adapted Chandler’s The Big Sleep and The Long Goodbye.

Neither the pilot with Peter Graves nor the six episodes with Brian Keith are available from standard sources, but bootleg copies of The Underground Man are available on iOffer.

For more information about Macdonald and his perceptive private detective, check out Tom Nolan’s biography and short story collection mentioned above and It’s All One Case: The Illustrated Ross Macdonald Archives, by Kevin Avery, Paul Nelson, Jeff Wong, and the author himself (Fantagraphics, hardcover, $44.99).

Dick Lochte is a well-known literary and drama critic and contributes the “Sounds of Suspense” audiobook review column to Mystery Scene. He received the 2003 Ellen Nehr Award for Excellence in Mystery Reviewing. His prize-winning Sleeping Dog and its sequel, Laughing Dog, are available from Brash Books.