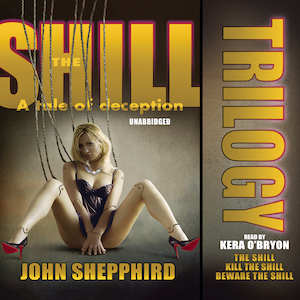 This trilogy by Shamus Award-winner Shepphird sets a new high standard for woman-in-jeopardy fiction. It consists of three linked novellas that follow the travails of Jane Innes, a likable but hapless underemployed actress whose string of bad luck takes her ever deeper into noir, but not without moments of dark humor. Trouble appears in the form of Cooper Sinclair, a handsome newcomer to her acting class, who romances then seduces her, both literally and into a life of crime. Confessing to being a con man, he outlines a can’t-fail scam involving the sale of a supposed fortune in diamonds to a lecherous wealthy realtor. Against her better judgment, she agrees to play the role of the shill—the accomplice who adds credibility to the con, in this case by portraying a sexy heiress. Of course, things go awry all the way to murder, with Jane left to face the cops with a corpse in her car trunk. Released after suffering a brutal attack in prison, she’s approached by an FBI agent who tells her she’s been used by a powerful gang of swindlers who now want her dead. Determined not only to survive but to settle the score with the con artists, she agrees to help the agent find them. The trail leads from L.A. to Sarasota and another murderous attack on Jane. Then, traveling alone, she heads to Miami and the Turks and Caicos, where once again she winds up in jeopardy. Battered but unbowed, Jane survives and continues her quest back to California for more danger, leading to a final explosive confrontation. Reader Kera O’Bryon uses a soft, almost flirtatious narration that is surprisingly effective in rendering the action-packed, heavily plotted yarn. She capably presents a protagonist forced by circumstance to cope with shocking twists, turns, deceitful allies, and an assortment of imaginative perilous situations, eventually leading to a discovery of her full potential. Including a pair of vicious but oddly amusing villains, nicely interpreted by O’Bryon, this is entertainment, unpretentious and nonstop.