In her Detective Esa Khattak novels—set in Toronto—Khan shows the struggles of a devout Muslim living and working in a secular world. 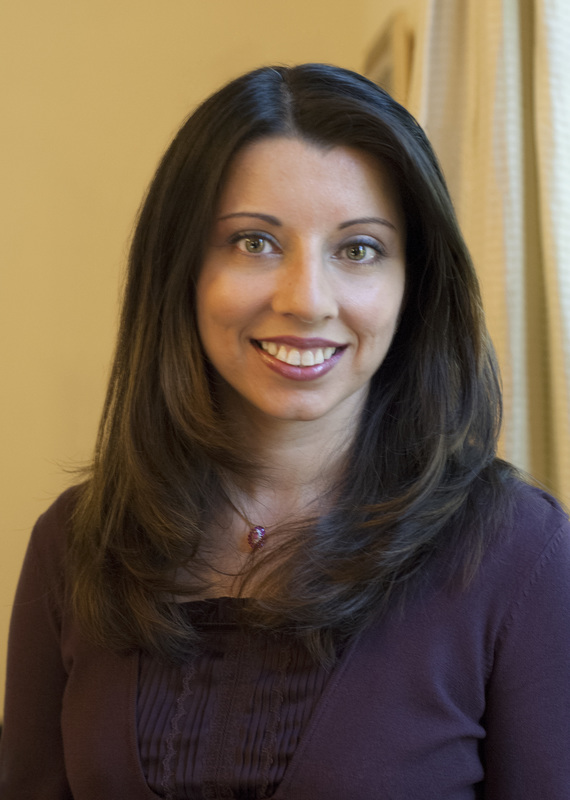 A Ph.D. dissertation on the Bosnian War, concentrating on military intervention and war crimes, may not sound like fodder for a police procedural set in Toronto, but for attorney and human rights activist Ausma Zehanat Khan, a mystery was the perfect vehicle to help people understand the horrific 1995 massacre at Srebrenica.

“A mystery allowed me to present the story of the war and genocide in a way that would not overwhelm the reader—or me. A mystery gave me a little bit of distance to approach the story. And a mystery gave the reader a little bit of distance so they are not overwhelmed by the series of horrors,” said Khan, who studied the war in Bosnia for about 12 years, beginning in graduate school.

“To simply say these things happened isn’t enough. But to tell the story from the perspective of a detective—that is so relatable and personalizes the story. A mystery also leaves it up to the reader to decide what is justice. A mystery allows the reader to come to the story on their own. I knew I always wanted to tell the story of the war in Bosnia, and I tried to tell it in several different ways. I tried the traditional novel and found it difficult to get inside the head of my characters. I found it difficult to be as authentic and accurate as the story needed to be to the experience of war,” added Khan, whose first name is pronounced US-ma; her middle name Zay-HAHN-at.

The result was Khan’s gripping debut, The Unquiet Dead, part thriller, part police procedural centered on Canada’s Community Policing Section, the agency tasked with handling minority-sensitive crimes. The department is headed by Detective Esa Khattak, a devout Muslim, and his partner, Sergeant Rachel Getty. In The Unquiet Dead, the two investigate the seemingly accidental death of Toronto resident Christopher Drayton, who fell off a cliff. But the case becomes politically charged when a war crimes historian suspects that Drayton was an alias for Drazen Krstic, one of the Bosnian war criminals responsible for the 1995 Srebrenica massacre, which Khan writes is “Europe’s greatest atrocity since the Second World War.” Characters’ flashbacks and discussions, as well as passages from testimony at war crimes trials, become an important part of the plot.

Khan’s ability to write about war atrocities and highly charged issues yet avoid writing a treatise while wrapping her story in the intriguing elements of a mystery, resonated with readers and critics. The Unquiet Dead made several best-of-the-year lists and made Khan an author to watch.

Khan brings that same mixture of facts and politics to her second novel, The Language of Secrets, which already has garnered several positive reviews. Based on a real Muslim terrorist plot foiled by Canadian law enforcement in 2006, The Language of Secrets has Esa and Rachel investigating the murder of Esa’s estranged friend, who had secretly infiltrated a terrorist cell planning a devastating attack.

Even more than The Unquiet Dead, The Language of Secrets showcases Khan’s ability to take an issue and weave it into a mystery without resorting to didacticism. It also shows Esa’s struggle with being a devout Muslim whose religion is often a source of conflict while living and working in a secular world.

Persian and Urdu poetry play a special part in The Language of Secrets, an aspect inspired by the author’s parents’ love of poetry and storytelling. Khan’s India-born parents celebrated an oral tradition of storytelling. Her father, a psychiatrist, and mother organized “beautiful poetry evenings” called mushairahs that would include their four children. This instilled a love of writing from an early age.

“The importance of learning the Qur’an was impressed on us, so I grew up with a respect for the written word,” said Khan, who was born in England, raised in Toronto, and now lives in Denver with her husband, a professor of Middle East Studies and “a handy resource” at the University of Denver.

Khan holds a Ph.D. in International Human Rights Law with a specialization in military intervention and war crimes in the Balkans. She has practiced immigration law and taught human rights law at Northwestern University and York University, and was the founder and editor in chief of Muslim Girl, a magazine targeted to young, Muslim women. 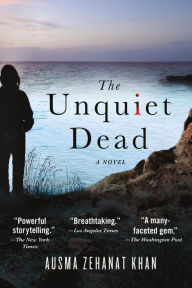 “The Unquiet Dead had been inside me for so long,” she remembered. “Because I hadn’t turned my dissertation into a book, as events on the ground were changing too quickly, I always felt I had left [people’s] stories untold. I had a responsibility to the survivors. Here I had all this material and it would have seemed like a failure to the people who needed me to speak for them.”

Working on The Unquiet Dead became a sort of cathartic experience for Khan. “Once I had written The Unquiet Dead, I felt such a sense of relief. My responsibility was fulfilled. If I had not done something with the knowledge I had, I would still carry the burden of not having represented the human rights of this particular group of people.”

The timing was also right apropos of the global political climate. Muslims were increasingly being vilified in entertainment and for political expediency.

“I had qualms about writing about a Muslim, especially in the climate in the US. I see stories in the news all the time and in pop culture and thriller novels. The Muslims are the bad guy, the terrorist, they want to destroy our world,” said Khan, herself a practicing Muslim. “And to me, making the Muslim the bad guy is a very simplistic and banal kind of conversation. This group of people is being misrepresented or talked about or spoken for, but they rarely get to speak for themselves. You don’t hear their voices. This rise of Islamophobia, especially during election season, has become a selling tactic for votes. The war in Bosnia began with hate propaganda directed at the ‘Other.’”

And to tell her stories, she needed a special kind of protagonist. Insightful and often charming, Esa also may be one of the first devout Muslims to be considered a hero—rather than a villain—in a mystery series. The first time readers meet Esa in The Unquiet Dead, he is kneeling on a prayer rug woven by his Pakistani ancestors when he receives a call about an investigation. After he takes the call, he finishes his Maghrib prayers before heading to the scene of the crime. In creating Esa, she drew on her background, making him a part of the same Pashtun tribe as her parents and herself. “But he is more reserved, keeps to himself, very different than I am,” she said.

“Esa has a great talent for tackling investigations head on. He is a believer. He is comfortable in his faith—he knows how to make it work. He is very much a part of the society in which he grew up in. And I thought the greatest challenge I could present to him personally and professionally in The Language of Secrets was to add a terrorist group to his investigation. And how a terrorist cell should not be [assumed] to represent the entire religion. I thought that presented a lot of good knotty material for Esa to work with.”

Balancing Esa is his partner Rachel Getty, who “could not be more Canadian,” said Khan. “She has a hockey-playing identity and is very tough on the outside. She has a lot of empathy for people, but also is rather awkward and has flaws, as do all of us. The readers seem to like Rachel.”

Despite Khan’s years of legal work on behalf of genocide survivors, her activism, and the time spent on her dissertation, she still needed to research the war when it came time for her to write her novel. That meant digging out the six large boxes of survivor testimony, United Nations statements, and government reports she had in her garage, and rereading a 7,000-page court document on the Netherlands’ role in one of the massacres that she had used for her dissertation.

“Once you’ve read survivor testimony, it never leaves you. Snippets come to you every now and then,” she said. “But I had to refamiliarize myself with the research. I needed to bring myself up to date on current survivor testimony, what crimes had come up and which people had been convicted. I was immersed in this a long time, deciding which story I wanted to tell. I was looking for stories that were both personal and emblematic of the larger Bosnian experience.”

This fresh look at research took Khan about a year and a half as she learned new details about the war and genocide that had been discovered. Yet, Khan was careful not to make The Unquiet Dead sound like another academic journal and to keep that research subtly, yet forcefully, woven through her novel. 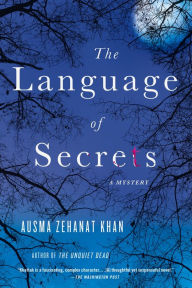 “I was very aware of the pitfalls that all that research could bring. I didn’t want my novel to sound as if it were propaganda,” she said. Khan had entered The Unquiet Dead in the Minotaur Books/Mystery Writers of America First Crime Novel Competition. Khan didn’t win, but Elizabeth Lacks, the Minotaur editor who read her manuscript, felt strongly about the novel. Khan gives credit to Lacks for helping to shape her debut. “I had a very talented editor who was quick to tell me if my story was too much or the research was overwhelming. You have to let the reader come to it on their own, not overburden them with the research.”

A series that tackles war criminals, terrorist cells, and political prisoners—the subject of Khan’s forthcoming third novel—would seem to leave little room for levity. Nothing could be further from reality. During an hour-long telephone interview, Khan came across as both a serious scholar and passionate about human rights but also as an energetic young woman with a good sense of humor. She said she is a big science fiction and fantasy “geek” and is a fan of the CBS series The Big Bang Theory and comics who “have a quintessential Canadian, dry humor.”

She has finished a draft of her third novel and will soon start her fourth in the series. She is also working on a four-book fantasy series scheduled to launch in 2017 with The Bloodprint: Book One of the Khorasan Archives. Khan said the series will be set in a politically nuanced world inspired by the current political climate of the Middle East, and will be helmed by a heroine named Arian who embarks on a dangerous quest to reclaim a sacred text.

Writing mysteries fulfills a lifelong dream for Khan, who also sees another goal she is achieving.

“I have been reading mysteries all my life but have not often seen characters of color or writers of color. To have the chance to add my voice and perspective has been very heartening and could be an opening for other writers down the road. I feel so lucky to have my voice out there.”