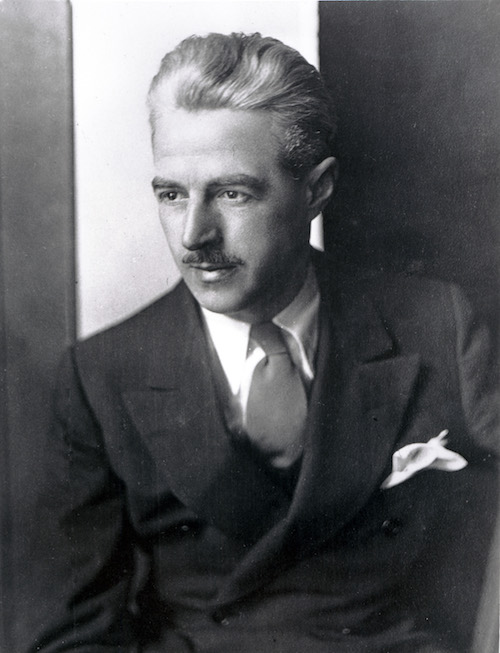 “I started The Maltese Falcon on its way to you by express last Friday, the fourteenth. I’m fairly confident that it is the best thing I’ve done so far.”
—Dashiell Hammett’s June 16, 1929, letter to his editor at Alfred Knopf, Harry Block.

The final manuscript was published on Valentine’s Day the following year, but, before that, the September 1929 issue of Black Mask magazine featured the first of five installments. It marked the print debut of Sam Spade, the man with the V-for-victory face and yellow-gray eyes, who resembled “a blonde Satan” and who would later be introduced, justifiably, on his weekly radio show as “The greatest private detective of them all.”

Because of the novel’s popularity and critical acclaim, it’s surprising that Hammett was not tempted to write a full-length Spade sequel—a blessing, maybe, considering the three unremarkable Spade shorts (A Man Called Spade, Too Many Have Lived, and They Can Only Hang You Once) he was lured into writing for the high-pay The American Magazine and Colliers. A well-received prequel, Spade and Archer (2009), was written by Joe Gores, an excellent crime writer and Hammett expert.

The 1941 film The Maltese Falcon, by debuting director John Huston, who basically used the novel as a screenplay, is arguably the best private detective movie ever made, boosting careers for all—Huston, Humphrey Bogart, Mary Astor, Peter Lorre, and Sydney Greenstreet. The first movie based on the book doesn’t even come close to the excellence of Huston’s, but it’s worth watching because, made just a year after the book debuted, its ’30s look and feel mirrors the book’s, and Ricardo Cortez’s lounge-lizardy Spade is a fascinating interpretation of the character. Both versions are available in Humphrey Bogart – The Signature Collection, Vol. 2 (Warner Home Video, 7 CDs, $27.98). The package includes other Bogart films and an oddball adaptation of the Falcon, Satan Met a Lady, with Warren William playing a sleuth named Shayne and Bette Davis as a character based on Brigid. (She hated the movie.) Another Spade flick, sort of—The Black Bird (1975)—has George Segal as a scruffy, angry Sam Spade, Jr. It seems funnier now than it did in the theater, especially the references to the 1941 film, including the return of Lee Patrick’s Effie and Elisha Cook, Jr. as Wilmer the gunsel. That almost makes up for the continuing wince-inducing racist gags about Junior’s name (i.e., “He don’t look like no spade to me”) (Sony, 110 minutes, VHS cassette only, from $14.95, Amazon.com). 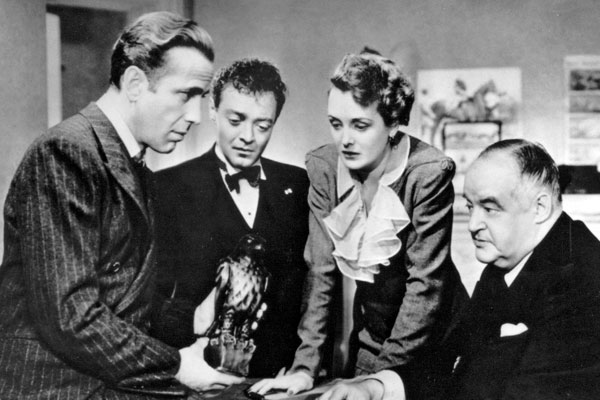 Brilliance has just reissued a Naxos unabridged Falcon MP3-CD (8 hours, $14.99) read by Eric Meyers. A character actor, Meyers does well by the supporting cast—Brigid O’Shaughnessy, Joel Cairo, Wilmer, and the fat man, Kasper Gutman—creating his own voices rather than trying to imitate the famous film’s performers and providing Gutman with an inventive, syrupy Southern accent. His Spade is a bit less than dynamic, however, making him seem like a straight man surrounded by scene-stealers. Reader Jeff Gurner gives Spade his due with a vigorous, cynical interpretation narrating the original pulp magazine version (Black Mask III, The Black Lizard Big Book of Black Mask Stories, edited by Otto Penzler, HighBridge Audio, 6 CDs, 7 hrs.). There are dozens of readings on YouTube. A BBC full cast 2-hour version has Tom Wilkinson as Spade (Audible Audio download, $9.95) and a more interesting abridgement stars Michael Madsen as Spade (Hollywood Theater of the Ear, Blackstone, 3 hours ). An audio of Joe Gores’ entertaining prequel, Spade and Archer, read by Scott Brick, is available from Audible download and Books on Tape (8 hours, 45 mins., 7 CDs, unabridged).

Spade’s radio career began in 1943, on Lux Radio Theatre, starring Bogart’s fellow-Warner Bros. stalwart Edward G. Robinson in the role. Other film adaptations followed, but it wasn’t until August of 1946 when producer-director William Spier cast relatively unknown actor Howard Duff as Spade that the character became a radio icon. Duff had the right voice and the right attitude to turn Hammett’s creation into a hardboiled, wisecracking private eye that listeners loved. It also helped the PR departments that the actor looked the part. Originally on ABC, moving later to CBS and, eventually, NBC, The Adventures of Sam Spade lasted for 245 episodes, none penned by Hammett, though several were based on his Continental Op stories. The show might have continued, but, after removing Hammett’s name from the credits, McCarthyism and the Red Scare prompted NBC’s request that the politically liberal Duff step down as Spade. His replacement, Steve Dunn, an affable actor, was unable to make listeners forget Duff’s brand of toughness and wit. Of the 60-plus episodes that have survived (via Radio Spirits and various Old Time Radio web sites), I prefer those written by Bob Tallman and Gil Doud, a perfect example being “The Critical Author Caper,” an adaptation of Hammett’s novel The Dain Curse. Tallman, partnered with Jayson James, penned the hour-long The Kandy Tooth Caper, which was reprised on Suspense. In it Falcon’s Gutman and Joel Cairo return, involving Sam in another quest for a priceless object. It’s fast and funny and includes the only time Spade and Philip Marlowe ever compared notes. Marlowe is played by Suspense host Robert Montgomery, who was Chandler’s sleuth in the film The Lady in the Lake. (Both Author and Tooth can be sampled on YouTube.)