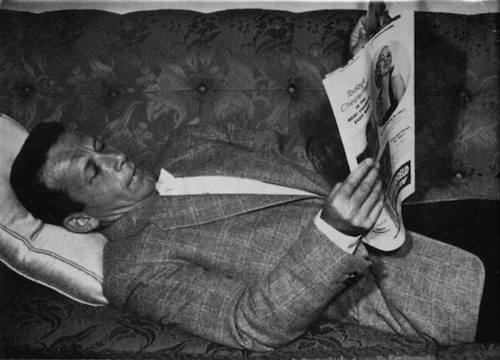 William Campbell Gault was a serious writer, as concerned with social issues and non-simplistic morality as with telling an entertaining, fast-moving story. (Warning! This article contains plot spoilers.)

By the time his first novel appeared, Gault had served a long apprenticeship in the pulp magazines, beginning with sports stories before branching out into mysteries. The action of the Edgar-winning Don’t Cry for Me (1952) takes place around Christmas 1950 in Southern California. First-person hero Pete Worden is the playboy black sheep of a wealthy family, a former USC quarterback whose relationship with intellectual beauty Ellen Gallegher is a typical male-female pairing in Gault’s world. When Pete decks one of suave gangster Nick Arnold’s more dangerous party guests, the thoughtful host provides Pete with a bodyguard, an offbeat character who left the Communist Party because you have to change your mind too much. The angry guest turns up dead in Pete’s apartment with steak knife in his throat, making Pete the major suspect. Apart from the murder investigation, Pete has a major ethical conflict: will he or won’t he accept a job offer from Arnold? 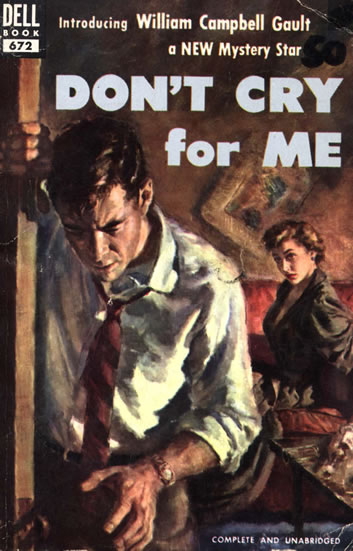 The book has a bittersweet quality, conveying the loneliness of the holiday season for the unattached and harshly satirizing the commercialized Christmas celebration that goes on while Americans are cold and dying in Korea. The finishing confrontation between Pete and a surprising but believable killer is matched by an unexpected but appropriate ending to the romantic story. Gault’s local color and pervasive literary references sometimes seem extraneous rather than organic, and the social commentary would be better integrated with the story in later books. Still, Don’t Cry for Me remains a remarkable debut.

Through the early ’50s, Gault produced detective novels without continuing characters, each in a fresh, vividly realized background. Later he would opine that his non-series books represented his best work. In The Bloody Bokhara (1952), the only Gault novel set in Milwaukee, a rare Persian rug is sought by a cast of colorful characters, including a beautiful, enigmatic woman who falls in love with the rug-dealer hero. The novel is much more original than most with Maltese Falcon-like plots.

The Canvas Coffin (1953) is one of the finest boxing mysteries ever written. The narrator, middleweight champion Luke Pilgrim, has a typical Gaultian relationship (rough-but-literate jock and artistic, sophisticated woman) with a Chicago commercial artist. Gault’s well-chosen details capture the L.A. of the ’50s: the seal tank outside a restaurant on the Pacific Coast Highway, TV coverage of wrestling, the blue bakery windmill, tacky Lincoln Boulevard, pervasive used car lots. The question of who will win the upcoming title fight piques the reader’s curiosity as much as who committed the murder, though the brutal fight scene will win few fans for boxing. Another good sports mystery, Fair Prey (1956), written under the name Will Duke, follows its main character’s adventures on the pro golf tour.

Run, Killer, Run (1954), a rare third-person Gault novel, illuminates his political stance: Republican, socially concerned, anti-McCarthyite, a consistent voice for non-simplistic morality. While the finish is exciting, the padding (usually the lead character’s repetitious introspection) renders it one of the author’s weakest efforts of the decade. 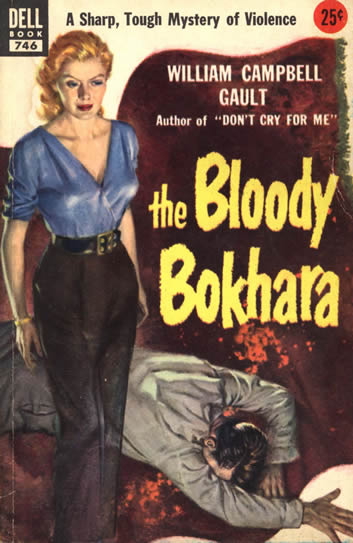 Gault’s best-known series hero makes his debut in Ring Around Rosa (1956). Beverly Hills private eye Brock (the Rock) Callahan, who had three years in the wartime OSS before playing guard for the Los Angeles Rams, is the son of a San Diego policeman killed in the line of duty. He knows all the LAPD’s Rams fans but gradually finds himself losing his cop friends. Brock’s doubts about his abilities as an investigator will assail him periodically throughout the series. In a variation on Chandler’s Farewell, My Lovely, boxer Juan Miro (a little client, in contrast to Chandler’s massive Moose Malloy) wants Callahan to find his missing fiancée, the nightclub stripper Rosa. Brock meets interior decorator Jan Bonnet, launching a prickly but strong relationship that will continue throughout the series. The novel ends satisfactorily with one of private eye fiction’s standard least-suspected-person solutions, well executed with genuine clues.

Day of the Ram (1956), opening at a Rams/Bears game and concerning the murder of promising Ram quarterback Johnny Quirk, ranks with The Canvas Coffin and Fair Prey as one of Gault’s best adult sports stories. The Convertible Hearse (1957) has the most appropriate possible background for a ’50s L.A. mystery: the machinations of the used-car business. Come Die With Me (1959) concerns the murder of a jockey and allows Brock to vent his negative feelings about horse racing, a sports background not presented as extensively as football, boxing, and golf in earlier books. In Vein of Violence (1962), about the murder of a silent-picture actress, Brock says of an old movie star’s TV comeback, “He had been a star in a medium run by fools and now he was trying to get a new start in a medium run by thieves.”

County Kill (1962), one of the best in the series, is the first to employ as a locale San Valdesto, a fictionalized version of Santa Barbara, where Gault lived in the last few decades of his life. The novel features one of the most memorable of Gault’s many strong female characters: Mexican bar proprietor Juanita Rico, who altruistically if illegally practices British-style drug addict maintenance to keep the Anglo pushers from getting rich and thus prevent the creation of new addicts. 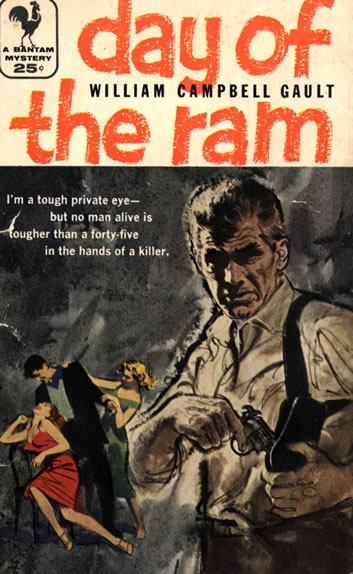 Gault’s other ’50s private eye, Joe Puma, shares many superficial characteristics with Brock Callahan: a big guy, more confident about his muscle than his intellect, operating out of Beverly Hills. But while the reader knows Brock will always do the right thing, Joe threatens to spin out of control. For all his talk about honesty, surrounded by temptations he moralistically resists, he seems to protest too much. He is obsessed with the idea of marrying a rich woman. One senses Joe has his price, albeit a high one. Where Brock values male bonding and is an integral part of the old-player network, Joe is a man who much prefers the company of women and has contempt for the immaturity of perpetual jocks.

Though Joe Puma appeared third-person in at least one early magazine story (“And Murder Makes Four,” Detective Tales, March 1951) and in Shakedown (1953; written as Roney Scott), his series proper begins with End of a Call Girl (1958). Asked by a madam to find a missing prostitute, Joe gets $100 a day and expenses, the girls the same price but no expenses. In a strong windup to a satisfactorily complicated plot, Puma confronts an interesting killer. A homophobia typical of the times is shared by all the straight characters, who use the kind of words for gays that a Gault character would surely abhor if applied to ethnic groups.

At one point in Night Lady (1958), set in a professional wrestling background, Joe has a fight with a “policeman,” the wrestler charged with keeping in line any colleagues who seek to climb the ladder by legitimately beating people. The description of the fight shows Joe can be a ruthless bastard in a way foreign to Brock Callahan. Becoming increasingly twisted in The Wayward Widow (1959), Puma loses his girl at the end to a Neapolitan and calls him a “lousy wop,” shocking conduct indeed for a Gault hero. Sweet Wild Wench (1959), a book-length version of the non-Puma magazine novelette “But the Prophet Died” (Dell Mystery Novels, January 1955), finds Joe investigating the Children of Proton, whose religion is based on electricity and the atomic structure. Of the crazy cults that turn up in Southern California private-eye fiction, this is one of the more interesting because of the extensive description of its theology. 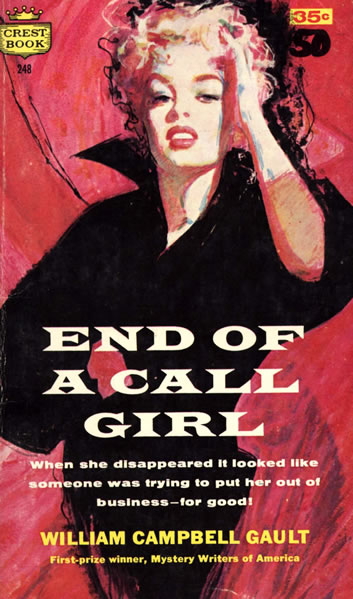 Through most of the ’50s, Gault continued to write short stories for the mystery digests, the pulps having virtually disappeared. The Joe Puma stories, usually of novelette length and as fully plotted as the novels, would be collected with some early non-series work in the posthumous collection Marksman and Other Stories (2002).

After his final Puma and Callahan books of the ’60s, The Hundred Dollar Girl (1961) and Dead Hero (1963) respectively, Gault left the mystery for nearly 20 years, concentrating on his sports juveniles. With that market weakening in the late ’70s, he reentered the field with a new series of cases for Brock Callahan novels, now married to Jan and living in San Valdesto. While the new books lacked the snap and energy of Gault’s ’50s peak, their characterization, social observation, and underlying humanity were notable. In The CANA Diversion (1980), Jan goes to jail for demonstrating against the building of a nuclear power plant in San Valdesto, and Ellen Puma, a previously unsuspected wife of Joe, asks Brock to find her missing husband. Brock’s police contact calls Puma “a real shady operator,” and Brock counters that he’s “no angel, I’ll grant you, but I’ve known a dozen cops who were worse!” When the murdered Joe Puma proves to have been severely bent, Brock makes up an alternate scenario to keep the truth from Ellen and their law-school-bound son.

The Dead Seed (1985) introduces an unusual twist on the religious cult: its leader is working in cahoots with a deprogrammer to soak rich parents. The courtroom climax attempts a statement about legal justice vs. vigilante justice. Death in Donegal Bay (1984) has an interesting villain in Cyrus Reed Allingham, a moral-majority supporter whose castle refuge includes a mined moat. 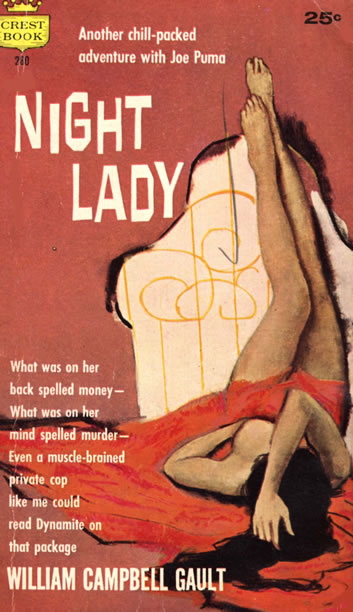 In his last years, Gault contributed columns to Mystery Scene and letters to Mystery and Detective Monthly, was elected president of Private Eye Writers of America and given its lifetime achievement award, and saw two final novels published, both with appreciative introductions by Bill Pronzini: the last Callahan case, Dead Pigeon (1992), and the non-mystery Hollywood novel Man Alive (1995), written in 1957 and admiringly rejected for commercial reasons by his publishers.

Gault was one of the strongest voices in genre fiction for ethical behavior and racial and political tolerance. His voice was so distinctive, few fans would fail to recognize it in a blind test. Artificial distinctions of genre aside, he was a serious writer, as concerned with social issues and non-simplistic morality as with telling a fast-moving story. Quite a few writers could plot, pace, and people a mystery as well as Gault, but not many could reach a reader as deeply on a gut level.

Collections
Marksman and Other Stories, 2002; edited by Bill Pronzini