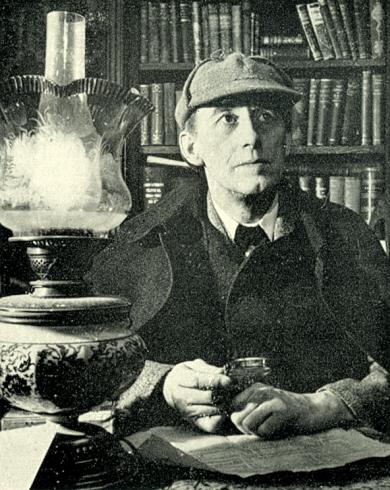 Carleton Hobbs (left) and Norman Shelley were the BBC’s choice to play Sherlock Holmes and Dr. Watson for over 20 years. Photo: BBC Radio.

The old coast-to-coast radio networks and their weekly dramatic programs are gone; but radio drama (including mystery stories) persists here and there in America, England and Canada. Meanwhile, great shows from the past can be enjoyed today on audiotape, on CD, and online.

John and Judith: Their Crime and Why They Didn’t Get to Enjoy It
Crime Classics
CBS; December 16, 1953

Producer-director Elliott Lewis was the creative force behind this extraordinary one-year series, which dramatized true-crime chronicles from ancient times to the (then) near-present. Cases ranged from the legendary (Lincoln’s assassination) to the obscure, with all scripts written (again) by the team of Morton Fine and David Friedkin, who achieved an amazing blend of stylized realism, period dialogue, and dark humor. The music was composed by Bernard Herrmann, by now one of the most respected film-scorers in Hollywood. Herrmann took the assignment as a favor and a challenge; limited by budget to a handful of musicians, he employed only instruments used during the time period of each week’s tale. The actors were the top West Coast radio players of the time, all of whom seemed to relish the opportunities given them by this most out-of-the-ordinary show.

Crime Classics told many murderous tales of 17th- and 18th-century England. “John and Judith” takes place in an English country town in 1684. A man’s affection for his servant girl leads to the poisoning death of his wife; but the new couple’s ill-gotten happiness is disturbed by the greedy intrusions of a goodwoman-neighbor (played with malicious glee by Jeanette Nolan), whose demands for payment in exchange for silence are incessant.

This show featuring “America’s fabulous freelance insurance investigator … the man with the action-packed expense account,” had a long and checkered broadcast history, from 1949 to 1962 (it left as the last-ever regularly scheduled network-radio dramatic program). During this span, it went from being one of the silliest detective shows on the air to one of the best (and then slipped partway back).

At its creative peak (October 1955 to November 1956), Yours Truly, Johnny Dollar ran as a 15-minute, five-nights-a-week program, with a single “Matter” unfolding in five serial episodes. Dollar’s assignments took him all over the 48 states and to foreign lands, for cases that ranged in tone from hardboiled to humanistic to sometimes whimsical. Bob Bailey (supported by a stalwart stock-company of LA radio actors) was superb as Dollar, who narrated the well-written tales as itemizations of his expenseaccount: “Item one: thirty-six dollars and seventy cents, transportation and incidentals, Hartford to Shady Lane, a quiet little town of around a thousand population…”

“The Shady Lane Matter” (written by Les Crutchfield, directed by Jack Johnstone) involves a woman in a small Vermont town shot to death for no apparent reason. A coroner’s open verdict allows imminent payment of an insurance policy—but an anonymous letter to the company prompts a trip, and a probing investigation, by Dollar. 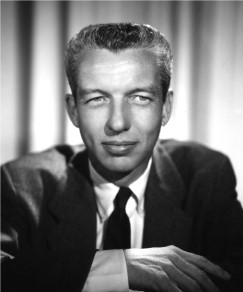 Tired of revisionist dramatizations of the saga of Baker Street, in which Sherlock Holmes is a testy neurotic and Dr. Watson a greater intellect than he once was? Return with us then to those thrilling days of yesteryear, when Holmes was Holmes and Watson was Watson, and never the twain would ambiguously meet.

For almost 20 years, British actors Carleton Hobbs and Norman Shelley were the audio personifications of Sir Arthur Conan Doyle’s mythical duo in a series of BBC radio adaptations of the Holmes canon which included this three-part, 90-minute version of that greatest of Holmes novels: the one that bears “the footprints of a gigantic hound.”

Hobbs achieved just the desired mixture of affection and condescension in his treatment of Shelley’s Watson, who was equal parts bluster, steadfastness, sympathy towards the plight of others, and amused or exasperated wonder at his brilliant friend’s abilities.

It’s the autumn of 1889 when Holmes is approached by a doctor from Dartmoor on behalf of the young heir Sir Charles Baskerville, whose predecessor as the head of the family line has come to a frightful end. Might a local legend involving a demonic hound have played a part in the dead man’s demise? And might the new heir now be in danger? After a preliminary visit to Baskerville Hall, Holmes leaves Watson in charge for a time—causing the good doctor to hope: “For once I may succeed where even Holmes has failed!” Then again, perhaps not.

This 1958 transcribed program hasn’t the ultra-crisp production values of later BBC radio dramas, but its sound effects and music work well to sustain a period feel and atmospheric mood. The supporting cast (including a blessedly non-obnoxious Canadian-American heir and a nicely underplayed villain) is uniformly fine, in a script by Felix Felton. Heard on American radio in a variety of formats, this Hound has also been packaged more than once on audiocassette.

Rumpole and the Confession of Guilt
Rumpole of the Bailey
BBC Radio; July 21, 1980

John Mortimer’s popular character Horace Rumpole, the barrister-at-law familiar from the long-running Mortimer-penned English TV series as well as from Mortimer’s short stories and a novel, had his origins in a Mortimer radio play. In fact, in 1980 Mortimer wrote a 13-episode series of BBC Radio scripts about Rumpole, in which Maurice Denham gave memorable voice to “the splendors and miseries” of this “Old Bailey hack.”

Horace—husband of Hilda (“She who must be obeyed”), father of Nick, imbiber of Chateau Fleet Street—has acquired a well-stocked bag of courtroom tricks while serving, “from time immemorial,” clients who sometimes don’t know their own best interests or even their own minds. A young Jamaican man accused of a violent crime is the one in need of Rumpole’s services in this half-hour play (one of several from this series made available over the years from different audio-publishers). Having signed a written confession, the accused now seeks to retract his statement, but once Rumpole begins work on his behalf, the defendant wants to change his plea to guilty.

Witnessing the courtroom proceedings with dismay is Horace’s son Nick, who takes a dim view of his dad’s attempt to discredit the arresting officer’s testimony. “That’s your stock in trade, isn’t it: doubt?” he taunts Rumpole. “Well they’re all guilty of something,” Horace shoots back; his job, as he sees it, is to defend the accused “by telling his story as well as I can.” This he does, with surprising and satisfying results—but son Nick isn’t present to acknowledge his triumph.

Whimsical, bittersweet, bluff, and vulnerable, the late Maurice Denham was wonderful as Rumpole, in a first-rate production skillfully directed by Ian Cotterell.

Rex Stout’s durable detective Nero Wolfe made his print debut in 1934—and almost immediately also leapt into movies, radio, and (eventually) TV. But before the 2001 A&E television series, the best non-book Wolfe came via this 1982 CBC radio series, which hewed closely in style and content to Stout’s actual stories and was far superior, for instance, to the long-running American radio series from the 1940s and ’50s.

Mayver Moore stars as Wolfe, with Don Francks (Walter in La Femme Nikita) as his erstwhile assistant Archie Goodwin, in the 13 well-directed (by Ron Hartman), well-played 50-minute CBC shows, all based on Stout novelettes. Some of these, including “Eeny Meeny Murder Mo,” were released commercially on audiotape.

In “Eeny Meeny,” a woman waiting to see the great detective is murdered in Wolfe’s office—strangled with one of Wolfe’s own neckties. The sleuth thus has personal as well as professional reasons for taking up the murdered woman’s case, which apparently involves improper behavior on the part of one of the members of the law firm where she worked. It’s a typical Stout story: at once breezy and thoughtful, serious and semi-comic—with a full cast of plausible suspects, drawn just sharply enough to hold one’s interest for the length of the tale. Moore’s Wolfe exudes the perfect mix of ire and insight; and Franck’s Archie is both street-smart and suave. The rest of the Canadian players are equally good, and Don Gillis’s original score also strikes just the right note.

Shows such as these bring crime and suspense tales to life in unique fashion. Radio dramas are different in effect from stageplays and movies; they’re closer to the experience of reading—but with sets, scenery, faces and expressions all provided by your memory, and a budget as big as your imagination. It’s an all-but-vanished art form with its own demands and rewards—not unlike its polar opposite, silent film. At the flip of a switch or the turn of a dial, you’re in another world, one fueled by the greatest mystery of all: the primal enchantment of being told a story.

Radio crime-drama, old and new, can still be found if you hunt for it:

The BBC's Radio 7 regularly offers treats from its archives (such as Ian Carmichael as Lord Peter Wimsey, in dramatizations of Dorothy L. Sayers’ books), which can be heard through its "Listen Again" feature.

Cape Cod Radio Mystery Theater was given a Raven Award by the MWA in 2005 for its contemporary productions with an old-time feel.

Radio Days has a list of US and Canadian stations offering OTR programming.

On the Air: The Encyclopedia of Old Time Radio
by John Dunning. Oxford University Press, 1998.
Detailed, comprehensive and extremely well-written. Dunning is also, of course, the author of the “Bookman” mysteries.

The Great American Radio Broadcast: A Celebration of Radio’s Golden Age
by Leonard Maltin, Dutton, 1997.
A collection of anecdotes and stories.