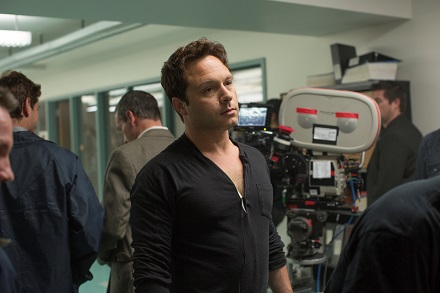 The HBO series True Detective, which wraps up Sunday (March 9) at 9 p.m., has been a showcase for Matthew McConaughey and Woody Harrelson, who play partners in Louisiana’s Criminal Investigation Division.

As Rust Cohle (McConaughey) and Martin Hart (Harrelson), the two actors dial down their usual on-screen personas to create a multi-layered story about the hunt for a killer that spans over 17 years.

McConaughey, in his pre-Oscar win for Dallas Buyers Club, is mesmerizing as Cohle, a man who has lost everything when the series begins in 1995 and has further spiralled down when he and Hart are called back when the investigation reopens in 2012.

Harrelson’s bombastic personality is channelled into Hart’s arrogance and inability to see anything but his own needs.

As good as McConaughey and Harrelson are, another star is even more important to True Detective—the series’ writer, creator and executive producer Nic Pizzolatto.

Pizzolatto deserves full credit for what True Detective is—a complex look at how an investigation into a horrible murder affects the two detectives, neither of whom was all that mentally secure to begin with.

Pizzolatto’s first novel Galveston was nominated for a 2010 Edgar Award. He also has written a couple of short story collections.

In addition to True Detective, Pizzolatto has been hired by Universal to write the script for The Rockford Files movie. Vince Vaughn is slated to play the iconic private detective James Rockford in the film.

Mystery Scene caught up with Nic Pizzolatto before the series began and, with the eight-season series now ending, this seemed the right time to post our interview. And if you are new to True Detective, start at the beginning, which is being encored on HBO and also is On Demand. Or wait for the DVD.

Mystery Scene: How did your background as a Louisiana native play intoTrue Detective’s scenery.
Pizzolatto: The landscape there has always haunted me and that setting was very important to me during my formative years. I’ve always been one of those people affected by my surroundings. I think of the landscape as the third lead in True Detective.

Mystery Scene: Your novel Galveston was nominated for an Edgar in 2010, and True Detective is very much crime fiction. What are your thoughts on crime fiction?
Pizzolatto: I certainly have crime fiction authors I love, but I am not a genre guy. I pushed myself into the crime genre because I like a plot. Most of my artistic obsessions—time, memory, character, the unknowability of our lives—that all fits very nicely under sort of existentialism of crime fiction embraced by noir.

I just like a good story. Fundamentally, I am always concerned about character, and I think you see that in True Detective. I am not interested in serial killers and I am not in some competition to see who can come up with the most disgusting serial killer.

I am just concerned about the humanism of these characters locked in this situation. And if you are going to trade in realistic plots, the ones that feature some form of criminality are the ones that are easiest for me to latch onto.

Mystery Scene: Did any one novel or movie influenceTrue Detective?
Pizzolatto: There have been so many influences from TV and books, but my love of theater also influenced True Detective. Particularly in the narrative style of having the story told. Theater is great story telling and great acting. And in True Detective you see a lot of scenes of the actors by themselves just talking to the camera. I have always had a love for the theatrical concept of the monologue. I love to see characters being given the chance to account for themselves.

Great plays are just characters telling a story. I like that intimacy that gives you a direct link to the character and allows you to see all their evasions and flaws. It also brings out those layered nuances that you have in fiction and that have great appeal to me

Mystery Scene: So many partners in cop novels and films are best friends. Yours are not.
Pizzolatto: Tension, in any genre, is fundamental in character, and Cohle and Hart have a lot of tension between them. When I started to write this during the summer of 2010, I thought True Detectivewould become a book. And in a way it is a novel that has taken a different form. It’s mainly a two first-person narrative, as it might be in a novel.

Most compelling to me was how these two men react to each other. They are both very complicated men. Each represents a number of contradictions. Neither knows how to live properly and they don’t know how to live in completely different ways. Hart, on the surface, should be the most grounded. He has all the things—family, children, marriage—that should anchor him. Cole is more of an island yet behaves with more control, responsibility and integrity. Both willing to cross the line of civilized behavior if their sense of justice is violated.

Mystery Scene: Were Matthew McConaughey and Woody Harrelson who you pictured in these roles?
Pizzolatto: It was written with them in mind, and they really make the most of that tension. Then after they really were cast, I went back to the first two episodes and retooled them for Matthew and Woody so True Detective would have their voice.