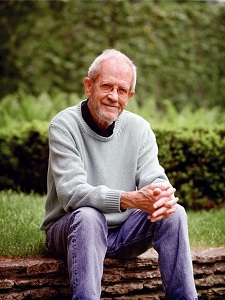 Elmore Leonard has always been one of our coolest authors.

He blurred the lines between good and bad, writing about characters who, no matter how violent had a soupcon of decency, as well as people who we were supposed to root for, but who had a streak of amorality.

Leonard did all that with minimalistic dialogue that seemed deceptively simple, until you realized just how much punch a few words could bring.

He did it with as little description about the scenery as possible until you realized just how much he showed about the setting.

And he did this with as spare and lean a story as possible, until you realized that he indeed was following one of his own rules of writing—“leave out the part that people tend to skip.” Leonard never used an “a” or “the” or “that” without a lot of thought.

Leonard, who died last week, Aug. 20, 2013, at age 87, left behind a legacy of more than 45 novels that appealed to readers of many generations. 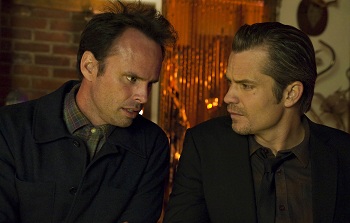 If Leonard was to be known only for the brilliant TV series Justified (FX) based on his 2001 novella Fire in the Hole, that wouldn’t be a bad thing.

Justified is typical Leonard in which the fine line constantly shifts between the choices we make in life.

The two men grew up together and know how each other thinks.

As each is fond of saying, “We shoveled coal together,” a phrase that may not mean anything to those outside of these Kentucky hills but is the upmost code for those who live in Harlan County. Each man could easily have turned the other way and each knows that. 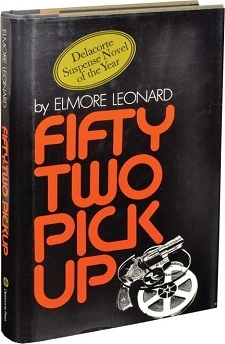 Justified succeeds because Graham Yost, the executive producer, head writer and showrunner, is wise enough to respect Leonard’s work as far as the nuances of character and dialogue. The fifth season is scheduled for 2014.

Leonard, who also was credited as an executive producer on the television series, returned to Raylan Givens in his 2012 novel Raylan. In Raylan, the marshal tackles a pair of dope-dealing brothers, a nurse who sells kidneys on the black market and a ruthless coal executive. Several of these subplots have showed up in Justified.

Leonard always made us reconsider who we should be rooting for.

Take Harry Mitchell, the amoral businessman who is being blackmailed over his affair with a stripper in Leonard’s 1974 novel 52 Pick-Up (made into a film in 1986 starring Roy Scheider and Ann-Margret). Harry is vulnerable to the blackmailers because his wife is running for city council. But Harry is more worried about his own business than his wife and in trying to outwit the blackmailers he puts his wife in danger.

Remember the movie buff loanshark Chili Palmer of Leonard’s 1990 novel Get Shorty? Chili’s criminal enterprises are comparable to the ruthlessness of Hollywood. 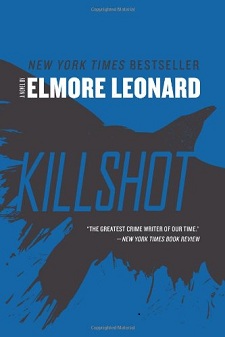 One of my favorite Leonard novels, Killshot (1989), probably wasn’t his best but I have an affection for it because it takes place mainly in Cape Girardeau, Missouri, which is located about 30 minutes from my hometown and a city I knew well. There’s also a few scenes in Cairo, Illinois, located seven miles from my family’s farm and the town in which I was born.

In Killshot, Detroit suburbanites Carmen and Wayne Colson are relocated by the feds to Cape after learning about an extortion plot by two crooks. They like Cape, especially Carmen. But the local marshal who is supposed to help the couple turns out to be as villainous as the two killers who are still on their trail.

For the most part, Leonard’s work translated well to the movie screen. Jackie Brown (based on Rum Punch), Get Shorty, Be Cool, Out of Sight, Hombre, and many more.

Aside from Justified, his stories haven’t been as successful on the small screen. Maximum Bob lasted only seven episodes in 1998 as did 2003’s even better Karen Sisco, based on the character from Out of Sight.

I think that is because ABC didn’t go far enough in the spirit of Leonard’s creation with the bombastic judge of Maximum Bob nor with the tough U.S. Marshal played by the terrific Carla Gugino (Jennifer Lopez played the role in the movie).

Cable is a much better fit for Leonard. 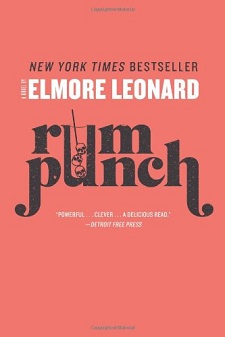 I’m not going into Leonard’s life history. Several good obits did just that and here the links to the Washington Post and the New York Times’ versions.

Since Leonard died, there have been numerous tributes and remembrances of him by authors wanting to honor him.

Some of the links are below, including a lovely appreciation by Michael Connelly; heart-felt tributes by Joseph Wambaugh, Denise Hamilton, Attica Locke, among others.

Meg Abbott has a terrific Q&A with Leonard that kicks off with the excepted---Leonard watching the musical film Top Hat.

And here is a link to his 10 rules of writing, which includes the wonderful word hooptedoodle.

There also have been a lot of postings and blogs by authors who may have brushed by Leonard in a hallway or met him at a signing and are trying to cash in on his death by their “memories.” Take Leonard’s advice and skip those.

Rest in peace, Elmore Leonard, and thank you for all the wonderful stories you’ve given us. You will always been one cool writer.