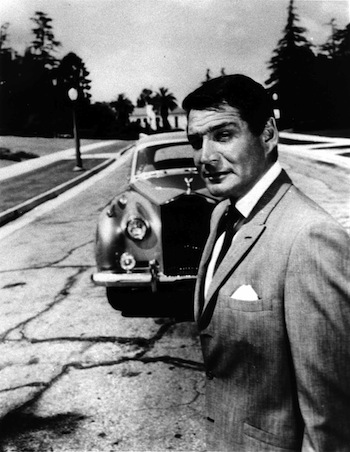 A weekly whodunit so lighthearted it nearly floated away.

In today’s TV world a crime show about a millionaire playboy LAPD homicide detective who shuttles around town in a chauffered Rolls-Royce, all the while dribbling out pithy bon mots, would be hooted off the airwaves. But more than 40 years ago there was Burke’s Law, a weekly whodunit so lighthearted it nearly floated away. Whimsical as it was, though, Burke’s Law set many of the conventions for mystery series that would follow.

Premiering on ABC in September 1963, Burke’s Law was the first notable success for super-producer Aaron Spelling. More importantly, it pioneered the concept of the special-guest-star mystery show, in which a roster of A (and sometimes B) list celebrities would pop up in cameos, usually as suspects. Later series including Columbo, Ellery Queen, and Murder, She Wrote would all gain traction through this technique, as would the subsequent Spelling hits The Love Boat and Fantasy Island.

The Burke of Burke’s Law was Captain Amos Burke, played by Gene Barry, an actor often described as television’s Cary Grant. Barry had filled out his Grant application a few years earlier with the Western series Bat Masterson, but it was his debonair, witty performance as Amos Burke that really cemented his image. There was more of Hugh Hefner than Joe Friday in this L.A. copper, as announced by the breathy female voice that purred, “It’s Burke’s Lawwww,” at the top of each show. The Law of Burke’s Law was the steady string of pertinent aphorisms Burke would toss off extemporaneously as the rules under which he operated.

During working hours Capt. Burke seemed to have little time or patience for going into the office, preferring instead to stay in his luxurious 19-room mansion and getting called out to cases by his detective sidekicks, the young and overachieving Tim Tilson (played by Gary Conway), and the veteran flatfoot Les Hart (Regis Toomey, who had played so many policemen in his long career that he should have filed for a departmental pension). The fourth member of Burke’s team was his chauffeur Henry, played by Leon Lontoc, with the added help on occasion of the efficient and (naturally) gorgeous Sgt. Ames, played by Eileen O’Neill. 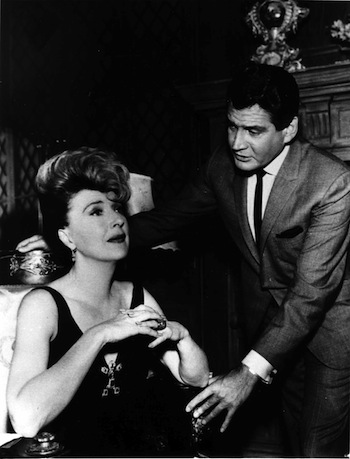 Each episode of Burke’s Law, at least for its first two seasons, bore the title “Who Killed” followed by the victim’s name or description. This was a carry-over from Amos Burke’s first appearance on television in a 1961 episode of The Dick Powell Show titled “Who Killed Julie Greer?” Powell himself played a slightly less suave version of Burke alongside a stellar cast that included Edgar Bergen (sans Charlie McCarthy), Nick Adams, Lloyd Bridges, Mickey Rooney, Carolyn Jones (as the victim) and Ronald Reagan. Burke’s assistants were Detectives Phil Winslow and Joe Nolan, played by a pre-Disney Dean Jones and Ed Platt, who would later become the Chief of Get Smart. Leon Lontoc was the only actor to make the transition to the series.

From a procedural standpoint, Burke’s Law depicted the workings of a major city police department about as accurately as Batman. In fact, the show might be considered the anti-Dragnet: The stories were not only false, many of them bordered on the absurd. One of the hallmarks of the series was that the characters played by the guest stars, ranging from rarely televised movie icons like Dorothy Lamour, Gloria Swanson, and Sir Cedric Hardwicke to comedians such as Don Rickles, Paul Lynde, and Buster Keaton, all ran toward the eccentric. In fact, some ran right past the eccentric and dove straight into the downright batty. In this aspect the show was closer to Britain’s The Avengers, which also presented a decidedly mad, upper-class world spinning around its sane protagonists, than anything found on American television at the time. It also offered Barry the chance to act as perpetually bemused straight man to the parade of wackos. (Just try, for example, to imagine how Jack Webb and Harry Morgan would have handled the sight of demented gardener Burgess Meredith gleefully dropping a leg of lamb into the maw of an agitated carnivorous plant, which he did in the season one episode “Who Killed Jason Shaw?”)

The epitome of bizarre spoofery may have been the 1964 episode “Who Killed Supersleuth?” which featured a laundry list of classic detectives, Carl Reiner as the deerstalker-donning Inspector House (get it?), Ed Begley as Belgian detective Bascule Doirot, Thomas Gomez as portly Caligula Fox, and J. Carrol Naish laboring under outrageous Asian makeup as Mr. Toto, all struggling to solve a murder. One can only wonder if Neil Simon tuned in that night to see Reiner, his former Your Show of Shows compatriot, and filed the idea away for his 1976 feature Murder by Death.

Not exactly camp, Burke’s Law might best be described as smirk, yet somehow it remained sophisticated and oddly cool in a wink-wink sort of way. The show also spawned another tongue-in-cheek crime series, Honey West, which featured Anne Francis as TV’s first female PI. Honey (who was based on a novel series by G.G. Fickling) made her first appearance as a character in a 1965 episode of the show. 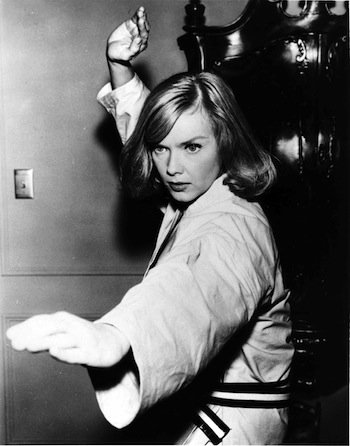 By then, though, Burke’s Law itself had been revamped to cash in on the red-hot spy craze. Now titled Amos Burke, Secret Agent, the show depicted Burke as working for a government department headed by a shadowy figure called The Man. Tilson, Hart, Ames, and Henry were all left behind, as was the uniform “Who Killed...?” episode titles. The producers might have been hoping for an American version of the British series Secret Agent (aka Danger Man), which had debuted stateside in April 1965, but what they got was a mishmash of ideas that ran last in the lighter-side-of-spying- Olympics, behind The Man From U.N.C.L.E., I Spy, and even The Wild, Wild West. The show should have been re-titled “Who Killed Burke’s Law?” since everything that had made the exploits of Capt. Burke so distinctive was gone, except for the Rolls. Amos Burke, Secret Agent survived only one more season.

Burke’s Law may have been gone but it was not forgotten. In 1994, 31 years after it premiered, the show was revived under its original title. Amos Burke was once more with the LAPD, and Gene Barry was back in the role (though he was now considerably past retirement age), and his sidekick was his detective son, Peter, played by Peter Barton. Unfortunately, the attempt to recapture the fondly remembered magic failed and the heavy-handed revival limped through only one season on CBS.

When seen these days, Burke’s Law can be viewed both as a palimpsest from which subsequent mystery programs were struck and an icon of an underappreciated era of American television when imagination and offbeat, bizarre humor were given equal time with the more conventional likes of Lawrence Welk and The Virginian. It is a time capsule to be sure, but also a window into a period when American television was arresting, maybe even a little surreal, but always drop-dead entertaining.