My Evening With Sherlock
J.M. Barrie 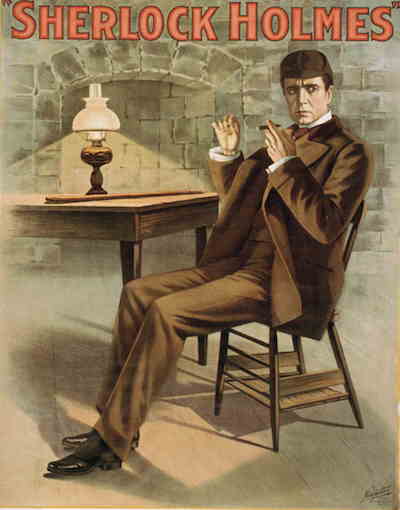 In a neat bit of literary detection in The Baker Street Journal, Charles Press has identified the author of the earliest known Sherlockian parody as J.M. Barrie, best known today as the creator of Peter Pan, and a close friend of Arthur Conan Doyle. Herewith, the piece which first appeared in The Speaker, November 28, 1891, four years after Holmes first appearance in print and just four months after “A Scandal in Bohemia,” appeared in The Strand.

Detail of the poster for the play Sherlock Holmes starring William Gillette, 1899.

I am the sort of man whose amusement it is to do everything better than any other body. Hence my evening with Mr. Holmes. Sherlock Holmes is the private detective whose adventures Mr. Conan Doyle is now editing in the Strand Magazine. To my annoyance (for I hate to hear anyone praised except myself) Holmes’s cleverness in, for instance, knowing by glancing at you what you had for dinner last Thursday, has delighted press and public, and so I felt that it was time to take him down a peg. I therefore introduced myself to Mr. Conan Doyle and persuaded him to ask me to his house to meet Sherlock Holmes. For poor Mr. Holmes it proved an eventful evening. I had determined to overthrow him with his own weapons, and accordingly when he began, with well-affected carelessness, “I perceive, Mr. Anon, from the condition of your cigar-cutter, that you are not fond of music,” I replied blandly—“Yes, that is obvious.”

Mr. Holmes, who had been in his favourite attitude in an easy chair (curled up in it), started violently and looked with indignation at our host, who was also much put out.

“How on earth can you tell from looking at his cigar-cutter that Mr. Anon is not fond of music?” asked Mr. Conan Doyle with well-simulated astonishment.

“The easiest thing in the world,” I agreed.

“Then I need not explain?” said Mr. Holmes haughtily.

“Quite unnecessary,” said I.

I filled my pipe afresh to give the detective and his biographer an opportunity of exchanging glances unobserved, and then pointing to Mr. Holmes’s silk hat (which stood on the table) I said blandly, “So you have been in the country recently, Mr. Holmes?”

He bit his cigar, so that the lighted end was jerked against his brow.

“You saw me there?” he replied almost fiercely.

“Ha!” said he triumphantly, “then yours was but a guess, for as a matter of fact I—”

“Did not have that hat in the country with you,” I interposed.

“Quite true,” he said smiling.

“Pooh,” said I coolly, “this may seem remarkable to you two who are not accustomed to drawing deductions from circumstances trivial in themselves (Holmes winced), but it is nothing to one who keeps his eyes open. Now as soon as I saw that Mr. Holmes’s hat was dented in the front, as if it had received a sharp blow, I knew that he had been in the country lately.”

“For a long or a short time?” Holmes snarled. (His cool manner had quite deserted him.)

“Your hat also tells me,” I continued, “that you came to this house in a four-wheeler—no, in a hansom.”

“Would you mind explaining?” asked our host.

“Not at all,” I said. “When I saw the dent in Mr. Holmes’s hat, I knew at once that it had come unexpectedly against some hard object. What object? Probably the roof of a conveyance, which he struck against when stepping in. Those accidents often happen at such a time to hats. Then though this conveyance might have been a four-wheeler, it was more probable that Mr. Holmes would travel in a hansom.”

“How did you know I had been in the country?”

“I am coming to that. Your practice is, of course, to wear a silk hat always in London, but those who are in the habit of doing so acquire, without knowing it, a habit of guarding their hats. I, therefore, saw that you had recently been wearing a pot-hat and had forgotten to allow for the extra height of the silk hat. But you are not the sort of man who would wear a little hat in London. Obviously, then, you had been in the country, where pot-hats are the rule rather than the exception.”

Mr. Holmes, who was evidently losing ground every moment with our host, tried to change the subject.

“I was lunching in an Italian restaurant today,” he said, addressing Mr. Conan Doyle, “and the waiter’s manner of adding up my bill convinced me that his father had once—”

“Speaking of that,” I interposed, “do you remember that as you were leaving the restaurant you and another person nearly had a quarrel at the door?”

“If you think that possible,” I said blandly, “you have a poor memory for faces.”

He growled to himself.

“It was this way, Mr. Doyle,” I said. “The door of this restaurant is in two halves, the one of which is marked ‘Push’ and the other ‘Pull.’ Now Mr. Holmes and the stranger were on different sides of the door, and both pulled. As a consequence the door would not open, until one of them gave way. Then they glared at each other and parted.”

“You must have been a spectator,” said our host.

“No,” I replied, “but I knew this as soon as I heard that Mr. Holmes had been lunching in one of those small restaurants. They all have double doors, which are marked ‘Push’ and ‘Pull’ respectively. Now, nineteen times in twenty, mankind pushes when it ought to pull, and pulls when it should push. Again, when you are leaving a restaurant there is usually some one entering it. Hence the scene at the door. And, in conclusion, the very fact of having made such a silly mistake rouses ill-temper, which we vent on the other man, to imply that the fault was all his.” 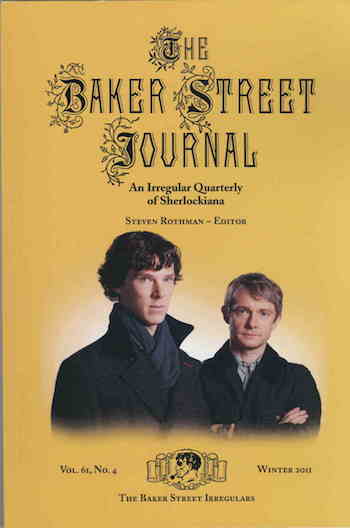 “Hum!” said Holmes savagely. “Mr. Doyle, the leaf of this cigar is unwinding.”

“Try anoth—” our host was beginning, when I interposed with—

“I observe from your remark, Mr. Holmes, that you came straight here from a hairdresser’s.”

This time he gaped.

“You let him wax your moustache,” I continued (for of late Mr. Holmes has been growing a moustache).

“He did it before I knew what he was about,” Mr. Holmes replied.

“Exactly,” I said, “and in your hansom you tried to undo his handiwork with your fingers.”

“To which,” our host said with sudden enlightenment, “some of the wax stuck, and is now tearing the leaf of the cigar!”

“Precisely,” I said. “I knew that he had come from a hairdresser’s the moment I shook hands with him.”

“Good-night,” said Mr. Holmes, seizing his hat. (He is not so tall as I thought him at first.) “Goodnight, I have an appointment at ten with a banker who—”

But he was gone.

Look for “The Authorship of the Earliest Known Sherlockian Parody,” by Charles Press in The Baker Street Journal, Winter 2011. It’s an interesting article in an always enjoyable publication.

In a neat bit of literary detection in the latest Baker Street Journal, Charles Press has identified the author of the earliest known Sherlockian parody as J.M. Barrie, best known today as the creator of Peter Pan, and a close friend of Arthur Conan Doyle. Herewith, the piece which first appeared in The Speaker, November 28, 1891, four year after Holmes first appearance in print and just four months after “A Scandal in Bohemia,” appeared in The Strand.
my-evening-with-sherlock
2843