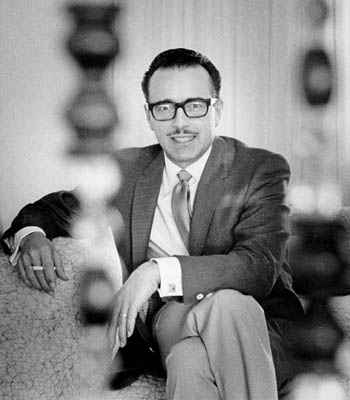 “Man, she had a shape to make corpses kick open caskets—and she was dead set on giving me rigor mortis.”
—Shell Scott, Dig That Crazy Grave

Graham Greene once said that he wouldn't dream of re-reading the favorite books of his youth. Re-reading them would only spoil their memory.

While that’s generally true, I think, I can still pick up some of the golden oldies and enjoy the hell out of them. Richard Prather came to mind recently as I was looking through the gorgeous Robert McGinnis book of paperback cover paintings edited by Art Scott last year. (The Paperback Covers of Robert McGinnis, Pond Press, 2001.)

Couple days later I found myself starting my third Shell Scott adventure. And loving it. While the books are funny, the humor sometimes conceals the solid craft of the storytelling. Prather knows all about narrative—color, pace, surprise. His take on women is politically incorrect, of course—not many women today would like to be thought of as “tomatoes”—but it’s an innocent pleasure because he clearly likes and admires women. No rape, no rough stuff, no belittling. Some of his heroines have brains as well as bodies. Shell is clearly a “wolf” in the parlance of the time.

So naturally I started wondering what Richard Prather was doing these days. I gave him a call, the last time I’d spoken to him being in the late 1980s. 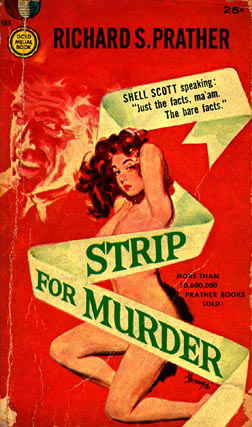 These days he lives in Arizona and spends a good deal of his time gardening. At 81 he says he’s had a very lucky and enjoyable life. He sounds like it, too. A softspoken man who is as wry as Shell.

He still recalls his first sale. This was 1950—he’s pretty sure it was July 7—when he was down to his last $100. His wife handed him a telegram they’d just received. It was from literary agent Scott Meredith. While Prather’s first novel hadn’t sold as yet, his second one had just been picked up by Gold Medal. The one with Shell Scott in it. Gold Medal liked it so much they offered him a four-book contract. The Case of the Vanishing Beauty appeared soon after and set sales records immediately.

Prather sees the Gold Medal years as the best of his publishing career. They knew how to package and promote the Scott novels. As any aficionado of paperback originals knows, the books went through so many printings over the years that virtually every major cover artist of the era had a chance to do a take on the white-haired hero who was rarely out of his trench coat. (The private eye’s code, you know.)

In my Catholic junior high school, I met kids who’d never finished reading a book before buying every Shell Scott mystery they could find. We’d swap favorite scenes, favorite lines, favorite sexual moments. Shell naked but for his gun belt in a hot-air balloon seemed to be the all-time favorite. You see, he had to go into this nudist colony looking for a killer and, well, one thing led to another and....

When paperbacks were still a quarter, and I still had a paper route, I could buy eight books a month, most of them Gold Medals. I also read Cavalier, published by Gold Medal’s owner Fawcett Publications. The magazine always announced a couple of months in advance when Shell would have a new adventure on the stands.

Prather says that the worst point in his career was when he got into various legal battles with publishers, battles that became nasty, public, and legendary. He said that Fawcett Gold Medal was honest in reporting not only how many they’d sold but how many they’d printed. They paid royalties upfront on print order. No waiting for returns. Roscoe Fawcett, the CEO, became a good friend.

Eventually, Prather was lured away from Gold Medal. I can still remember the shock—true shock—when I saw the first cover from the new publisher. A photograph of some dorky male model in a white trench coat with his hair spray-painted white. My Lord. What was going on here?

Not much, apparently. In my opinion the new publisher completely misjudged Prather’s audience by trying to take the Shellster to a higher social level. John D. MacDonald once said that he wrote his books “for men who carry their lunches in buckets.” MacDonald’s audience, until Travis McGee hit big, included a whole lot of working men. A dour guy with spray-painted white hair wasn’t likely to attract the same audience as the happy, smiling, virile ex-Marine who appeared on the Gold Medal editions.

Another high point in Prather’s career was being awarded the Life Achievement Award from the Private Eye Writers of America. It demonstrated that Shell Scott still had an active reader base and that Prather’s peers held him in the greatest regard.

For those of you who want to catch up on your Richard Prather reading, innumerable stores stock his books in the used section. Or if you prefer ebooks, you can get all 40 online. Try ’em, you’ll like ’em. They bring back the 1950s in a good-natured and rather innocent way. For more information log on to Dean Davis’ Richard S. Prather website.