The Lawyers Behind the Defenders
Oline Cogdill
Most people whose lives become fodder for television shows end up on the myriad of reality shows. But Las Vegas attorneys Michael Cristalli and Marc Saggese aren’t survivors, unless you consider their jobs a matter of surviving the legal system. And they certainly aren’t any real housewives, though they see plenty of drama in their work.
Cristalli and Saggese are the real Defenders whose courtroom exploits are the inspiration for the new CBS drama that debuts at 10 p.m. EST/9 p.m. CST on Wednesday, September 22. The Defenders will star Jim Belushi as Nick Morelli and Jerry O’Connell as Pete Kaczmarek as leaders of the Las Vegas law firm Morelli & Kaczmarek, which has a reputation of taking on the toughest, most difficult to defend clients.
Jim Belushi’s role as Nick Morelli is the onscreen version of Marc Saggese while Jerry O’Connell’s Pete Kaczmarek is the renamed Michael Cristalli.
Cristalli and Saggese’s partnership – and friendship – seems predestined. Their mothers grew up across the street from one another in a tightly knit upstate New York Italian community. Michael’s grandfather and Marc’s great-grandfather were close friends. In fact, look for a picture of the two men taken in 1931 that will be on the Nick
Morelli’s office wall in the pilot. Although Cristalli and Saggese grew up near each other, they never met until they were newly minted attorneys just starting out.
Cristalli and Saggese moved from Utica, N.Y., to Las Vegas in 1995 to launch his legal career as an intern before joining a firm. In 1999, Saggese left Utica for Las Vegas to launch his career. They quickly became friends, united by their background and became law partners four years after they met.
The two lawyers became known as taking on high-profile cases, including the murder trail for Sandy Murphy, accused with her lover, of murdering her former boyfriend Ted Binion, a member of the family-owned Binion's Horseshoe in downtown Las Vegas. The also defended bodybuilder Craig Titus and his wife Kelly Ryan who were charged with the 2005 murder of their personal assistant, Melissa James.
Both cases generated national headlines and the two attorneys appeared on Larry King, 48 Hours, Court TV, CNN and Good Morning America. Producers Joe and Harry Gantz decided Cristalli and Saggese were fodder for a docudrama, which became the basis for the CBS series. 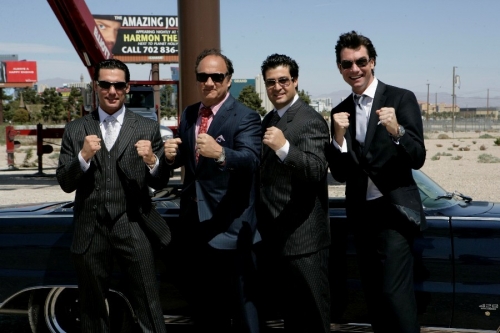 Somehow, Cristalli and Saggese managed to squeeze in between court dates answers to Mystery Scene’s questions about the show.
Here’s part one of that interview. Look for part two in a couple of weeks.
Q: Did you ever think your lives would be fodder for a TV show?
Marc: This show kind of found us — never thought in my wildest dreams that what I do professionally and personally would be featured in such a way. I never thought in a million years that a show would stumble into our office.
Michael: Certainly, this has been a surreal experience; we’ve never thought our lives would be the basis of a CBS drama! However, through The Defenders, we are fortunate to be able to project our message -- a view of the justice system through the lives of the defendant and the defense lawyer. To highlight the injustices of the justice system and how these two lawyers fight to protect the interest of their clients -- this is what law always meant to us, and its great to have a TV show as a platform.
Q: What’s it like to have your lives turned into a TV series? Are the characters’ personality quirks, private lives on the series as you are in real life?
Marc: The Defenders is very accurate personality wise. Jim and Jerry have us down to a tee. Our personality and interaction with each other are very real.
Michael: The Defenders takes certain dramatic liberties. Marc and I are both married. However, Pete is single and a ladies man, and Nick is on the outs with his own wife…but this represents the majority of dramatic liberties the show takes with our lives. Otherwise, it has been consistent with the theme of the documentary.
Q: TV is filled with strong series about the law, both now and in the past – The Good Wife, Law & Order, etc. How is your show different?
Marc: Our show is different because it is real. It’s based on real cases – we check in daily on the show’s legal accuracy. We make sure that this show is unique in virtue of its basis in reality. I don’t know of any other show that is so honest in its portrayal of what defense attorneys experience each day. It’s the one show that shines a light on
what it is to be a defense council.
Michael: Our show is a break away from that type of legal drama. Most of these are black and white – they are about the police and the prosecution getting the bad guy. There’s never a real development of the defendant in most courtroom shows. In real life, the law is grey. The defender’s develop the character of these two lawyers and
highlights the plight of a defendant facing overwhelming charges by the State. It is about the personal lives of these two lawyers and how they work to overcome those challenges.
Q: The previews show The Defenders with a streak of humor in it; will this be in the series?
Marc: This show is real life – what I really love about it is its sense of humor. Humor is essential. We have a sense of humor in order not to take ourselves too seriously and in an effort to cope. When you walk into a courtroom and you have a defendant looking at you, and his wife is in the front and his children are in the hallway crying, you know
the stakes are high. Imagine carrying a weight like that on your back everyday. Without having a sense of humor, you would crumble under that pressure.
Michael: Definitely a drama that has comedic value – but that’s truer to life.

Q: Are you pleased with the way Jim Belushi and Jerry O’Connell portray you?
Marc: They are both a lot funnier than I will ever be. Their depiction of how we care. There’s a scene in the first show where Jim is giving his closing argument. He puts his elbows on the rail and speaks to the jury, saying “what would you do?” You can tell in his face as an actor that he’s portraying someone who is involved emotionally and morally with the case. So much of what it means to be a good defense attorney is captured in the series.
Michael: Obviously, there’s dramatic liberties that enhance or magnify our lives to make it more fun or comedic. In reality, they definitely capture our essence – our care for the client, our care for the cause. They’ve done a tremendous job of portraying the realities, while keeping it entertaining.
Photo: Marc Saggese, Jim Belushi, Michael Cristalli, Jerry O’Connell. CBS photo
the-lawyers-behind-the-defenders
1554