"If anyone ever offers you a choice between luck and brains, take luck every time."

—Matt Cobb, Killed in the Ratings, 1978, by William DeAndrea 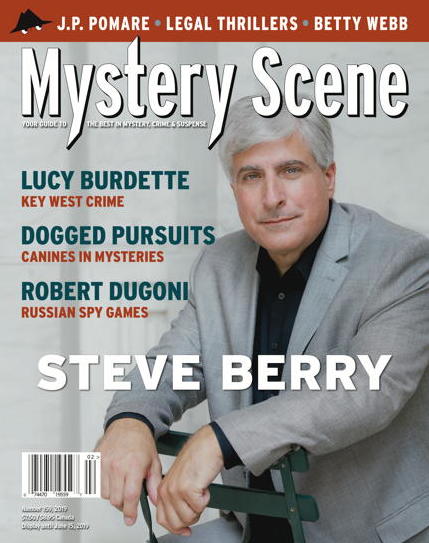 History lies at the heart of every Steve Berry novel. The lawyer-turned-author will gather approximately 300 to 400 books for research before sitting down to write one of his acclaimed globe-trotting thrillers. The result, including the enthralling 14th Cotton Malone novel The Malta Exchange, speaks for itself: his books have been translated into 40 languages, with 23 million copies in print across more than 50 countries.

But Berry originally told stories through a different medium: oratory argument. He was a trial attorney for 30 years.

“Trials are nothing more than a story based on the facts of the case,” he says. “It has a beginning, middle, and end that has to hold the jury’s attention, while simultaneously persuading them to your way of thinking. The only difference with a novel is that the purpose is to entertain.”

Berry is not the only person to have noticed the narrative virtues of courtroom work. In this issue, Jon L. Breen brings us a selection of recent legal thrillers in “Vital Verdicts.” Many of the writers began their professional lives as lawyers before picking up the pen.

Robert Dugoni is yet another lawyer-turned-author who ended up taking his own path. “When I started writing, I let my job as a lawyer influence me more than my reading. I was going to be the next John Grisham because, well, I was a lawyer and that was what people were buying,” he said. “With time, and experience, I’m happy being Robert Dugoni, and writing my own brand of novels in my own way.”

Oline Cogdill has rounded up a pack of canine sleuths—many of them starring in new series—for your entertainment. Turns out that man’s best friend can also be a detective’s ace in the hole.

Lucy Burdette, aka Roberta Isleib, sets her novels featuring food critic Hayley Snow in the lively setting of Key West, Florida. She enjoys the research which adds authenticity to the work, although it also poses challenges—particularly given that Burdette likes to populate her books with real places and people in addition to the made up ones.

“This is very hard,” she says. “By now I’ve included so many real people into these books that it’s hard to remember who is fictional and who isn’t.”

J.P. Pomare is a new voice in the fiction world—and an unusual one in that he hails from New Zealand. His literary psychological thriller Call Me Evie is one of the most anticipated debuts of the spring. Craig Sisterson catches up with him in this issue.

Pat H. Broeske has long been fascinated by one of the strangest of all noir films, Nightmare Alley, based on William Lindsay Gresham’s shattering 1946 novel. Read her article and then seek out the movie—if you dare!

"To Sherlock Holmes, she is always the woman."

—Dr. Watson commenting on Irene Adler, in "A Scandal in Bohemia," The Adventures of Sherlock Holmes, 1892, by Arthur Conan Doyle