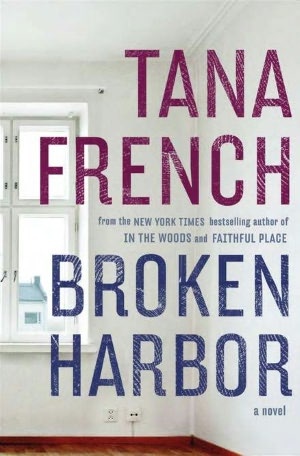 In need of a breezy beach read? “Look elsewhere, old son,” as Mick “Scorcher” Kennedy of Dublin’s Murder Squad might say. You won’t be finding safe mooring in Broken Harbor. Tana French’s latest is a bracing gulp of sea air—a contemporary police procedural/ psychological thriller that builds with all the humor and pathos, sidetracks and straightaways of classic, spellbinding Irish storytelling.

The coastal village, rechristened Brianstown to lure Dubliners into a 45-minute commute, can’t shake off its origins as Broken (a linguistic corruption of breacadh, meaning “daybreak”) Harbor. The gusts off the Irish Sea rattle rather than refresh the “New Revelation in Premier Living” that is Ocean View estates, a nearly abandoned development of jerry-built but luxury-look homes bought into by a few Yuppies who now can’t afford to leave. Underlying the dissonance is the keening of the once-roaring Celtic Tiger—Ireland’s economic explosion that ignited in 1995 after generations of poverty and fizzled by 2008. Those who grew up during the plenty have reached their twenties, ill-equipped to navigate the churned-up waters.

To cocksure middle-aged cop Kennedy, the Spain family seems to be the downturn’s most wretched casualties. Patrick, unemployed for the past year, and his two children, six-year-old Emma and three-year-old Jack, are dead. His brutally wounded wife, Jenny, lies unconscious in the hospital. Staking his claim on the highest solve rate in the Squad, Kennedy welcomes the high-profile gig, which he sees as a slam-dunk: “This case should have gone like clockwork. It should have ended up in the textbooks as a shining example of how to get everything right.” He, better than anyone, should’ve known not to put his faith in should haves. The Spains, too, tried to get everything right, and look how that turned out.

As he schools his rookie partner, Richie Curran, in by-the-book detective work, Kennedy holds back some pages from his own past in Broken Harbor, which Richie has dubbed “the village of the damned.” Tana French layers the tension not with the walking dead but with spine-tingling signs of disturbance amongst domesticity: weeds poking through the untrodden walkways, random holes smashed into the walls of the Spains’ otherwise immaculate home, baby monitors aimed at an open attic door, a souvenir pen gone missing, a child’s crayon drawing spattered with blood. Suspicion falls on the desperate Patrick. Then, when the team discover that a squatter has set up housekeeping in an empty apartment with a binocular view into the Spains’ lives, it seems that all the partners have to do is wait for Our Man to reappear.

Even in such a suburban wasteland, French’s always sinuous, sensual prose and attention to detail, both physical and emotional, paints a rich portrait of a picture-perfect couple whose frame ended up cracked. Also among the reasons to anticipate and enjoy another installment in French’s series-that’s-not-a-series is seeing how the actor-turned-author takes on the voice and MO of a bit player from one novel to her next. Scorcher Kennedy was scorned and one-upped by Frank Mackey, the undercover star, master manipulator, and narrator of French’s previous thriller, Faithful Place (after cameos in In the Woods and The Likeness). Here, the rule-reciting detective comes out from under Mackey’s jaundiced gaze and gets his due, and our sympathy, as we learn of the forces that shaped Mick’s self-control and that make his working mantra, “You need us” so much more poignant than arrogant.

As in Tana French’s other crime and character dissections, the unresolved past and fiercely defended vulnerabilities are what set everyone adrift in Broken Harbor, far from shore. That we hope, against all odds, they will find their way back is what keeps us turning these pages.

A bracing gulp of sea air—a contemporary police procedural/ psychological thriller that builds with all the humor and pathos of classic Irish storytelling.