Short Stories
The Big Book of Rogues and Villains 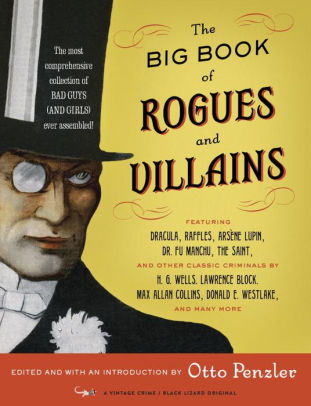 The Big Book of Rogues and Villains, edited by Otto Penzler, is an impressive compilation of stories—I counted 73!—that feature either a rogue or villain as a main character. In his introduction, Otto Penzler defines the difference between the two. A villain “is the creature of evil and malice, if not outright pathology” and a rogue “tends not to be vicious, prefers no serious physical injury to others and defines itself as rascality soaked in humor.” He goes on to explain the lines between the two are often blurred, and with that in mind he thoughtfully identifies each story as either rogue or villain.

The tales are categorized by era: The Victorians, Nineteenth-Century Americans, The Edwardians, The Pulp Era, Post-World War II, etc. Each period is fully explored with multiple stories from authors both famous and obscure. As an example, The Victorians section features tales from L.T. Meade and Robert Eustace, Grant Allen, Robert Louis Stevenson, Bram Stoker, Arthur Morrison, and E. W. Hornung.

Richard Connell’s classic hunting tale with a villainous twist, “The Most Dangerous Game,” is as powerful and entertaining today as it must have been when it first appeared in 1924. Leslie Charteris’ Simon Templar, The Saint, makes a dashing and very roguish appearance in the double-crossing “The Damsel in Distress.” Bruno Fischer’s villain-littered masterpiece of crime, greed, and revenge, “We Are All Dead,” is as dark and disturbing as anything in print. Martin Ehrengraf, Lawrence Block’s villainous lawyer who has never lost a case, is at his sinister best in “The Ehrengraf Experience” and David Morrell’s “The Partnership” cleverly asks and answers how many villains it takes to make a murder.

The Big Book of Rogues and Villains is a perfectly orchestrated reprint anthology. The stories are among the best in the genre, but also educate the reader about the development of the criminal as hero, or anti-hero, subgenre from its earliest examples to its most recent. It is a volume that will draw most readers back into its pages again and again.