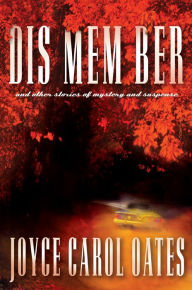 Dis Mem Ber and Other Stories of Mystery and Suspense is a marvelous collection of seven darkly paranoid gothic tales of madness, murder, and tormented adolescence by Joyce Carol Oates. The title story is a revelation of depravity narrated by a preteen Midwestern girl named Jilly. She is thrilled when an older cousin, his relationship to the family dubious, takes a secretive interest in her during a long and lonely summer. When he shows her something terrible, exhibiting a lusty and gleeful excitement in the sharing, she is more afraid of losing his companionship than the danger he represents to her.

“Great Blue Heron” is a sympathetic tale of madness featuring a woman dealing with the untimely death of her husband. The widow’s narration is unreliable and the story’s conclusion is both mysterious and haunting. “The Crawl Space” is the story of a very different widow grieving both her husband and the home they shared. But the secrets of her dead husband, and her suspicion he was involved with other women, pulls her into a darkness where she will likely never emerge.