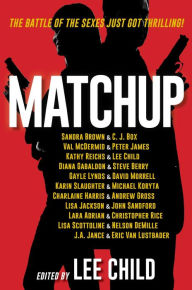 MatchUp, edited by Lee Child, is aptly titled since it pairs two thriller writers, along with their most popular series characters, for each story. The anthology is a who’s who of bestselling writers in the genre. A few of the “matchups” are C. J. Box’s Joe Pickett and Sandra Brown’s Lee Coburn, Kathy Reichs’ Temperance Brennan and Lee Child’s Jack Reacher, and Lisa Scottoline’s Bennie Rosato and Nelson DeMille’s John Corey. The quality of the stories, as is often the case in this type of anthology, varies, but most are very good and a few are exceptional.

“Past Prologue,” by Diana Gabaldon and Steve Berry, is a nicely devised story marrying the present and the past. Cotton Malone is attending an antiquarian book sale in Scotland when, during his morning constitutional, a wrong turn finds him lost in the confusing geography of the moors. Even more confusing to Cotton, he is seemingly in the distant past when the castle where he is lodging was a prison and bandits, rogues, and convicts roam the moors to everyone’s peril.

The best story in the anthology is Gayle Lynds’ and David Morrell’s “Rambo on Their Minds” featuring Liz Sansborough and, as the title suggests, Rambo. Liz is the victim of a Russian mafia kidnapping plot designed for a human ransom: Liz’s life for that of a recently arrested and seemingly low-level criminal. The kidnappers assigned to watch Liz are fascinated by, and spend a great deal of time talking about, the Rambo films based on David Morrell’s classic novel First Blood. Rambo never makes an appearance in the story, but his influence is in the form of What Would Rambo Do? And as it turns out, Rambo is more helpful to Liz than her kidnappers.