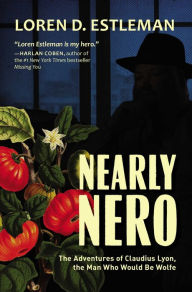 Nearly Nero collects 10 appealing Claudius Lyon stories by the always reliable Loren D. Estleman. Claudius Lyon, who changed his name from something or other to that of a Roman emperor, is a wealthy, town-house-inhabiting amateur detective, with a jones for Rex Stout’s Nero Wolfe. His admiration for the “world’s greatest detective” has encouraged him to mimic, in an off-kilter bizarro fashion, everything about the great orchid growing homebody. He raises tomatoes in a rooftop greenhouse because orchids are beyond his horticultural talents. An ex-con named Arnie Woodbine is his assistant for no other reason than his name is similar to Wolfe’s investigator Archie Goodwin, which is where the resemblance ends, since Woodbine spends much of his time embezzling money from the boss. A Yiddish-speaking kosher chef named Gus prepares all his meals. Lyon is alcohol intolerant, and, unlike Wolfe, drinks cream soda, but he tosses his pop-tops in a desk drawer, as Wolfe does his bottle caps. His townhouse is located in Brooklyn rather than Manhattan, and his relationship with the local police is worse than Wolfe’s for the simple reason that he is unlicensed and Captain Stoddard of the local Bunco Squad spends a surprising amount of time trying to catch Lyon taking payment for his services.

Murder is nowhere to be found in the stories, and the solutions—solved in good fashion, Claudius Lyon’s finger always digging in his ear to stimulate the cortex—often involve wordplay that is clever and groan-inducing at once. The stories are all well-written, entertaining, humorous, and will appeal to both knowledgeable and novice readers of Rex Stout’s Nero Wolfe.