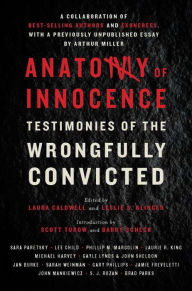 Anatomy of Innocence is a different kind of anthology. Its stories are written by highly regarded, often bestselling mystery writers such as Sara Paretsky, Lee Child, Gayle Lynds, and Jan Burke. The tales are fantastic enough to be fiction—a woman wrongly convicted of shaking a baby to death on the testimony of an uncredentialed expert witness using bad science, an easygoing man with a nearly deaf defense attorney convicted of raping a young girl despite multiple alibis—but they are frighteningly true.

Included are 15 stories of men and women exonerated of wrongful criminal convictions. Each is told with the visceral flare of fiction, focusing on a moment of the journey to prison—arrest, interrogation, trial, incarceration—rather than the clinical chronology of events. Sara Paretsky’s “The Trip to Doty’s Road” narrates the interrogation of a young African American, David Bates, suspected of murdering a drug dealer. Taken to Chicago’s infamous Area Two headquarters on 111th Street, he falsely confessed to the murder. The interrogation lasted 24 hours and included physical beatings, “slapping, kicking, and punching,” torture, and humiliation. With “Descent,” Michael Harvey adroitly describes the horror of conviction and incarceration in a maximum-security prison, and Jamie Freveletti relates the emotional roller coaster experienced by an inmate during the long and often discouraging process leading to a convict’s exoneration in “The Last Bad Morning.” The stories are all nonfiction, but this anthology should appeal to anyone who enjoys reading modern crime fiction.