"Whenever he saw a dollar in another man's hands he took it as a personal grudge, if he couldn't take it any other way."

—Jeff Peters of Andy Tucker in "The Octopus Marooned," The Gentle Grafter, 1908, by O. Henry 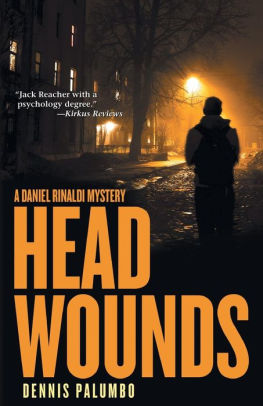 The fifth book in the Daniel Rinaldi series picks up soon after the events of the previous story, 2014’s Phantom Limb, and finds Dr. Rinaldi, a psychologist who consults with the Pittsburgh Police Department, studying a dossier that supposedly holds a clue to the unsolved killing of his wife years earlier. It is a calm night, the doctor enjoying some Miles Davis on the stereo, until his window is shot out by a neighbor’s abusive boyfriend. As the story unfurls, it is soon learned that the woman lied to her lover, claiming she had cheated on him with Rinaldi. While this would be a good setup for a story, in Head Wounds it is only the catalyst for more intense darkness and tragedy to come.

Dr. Rinaldi, who has never been all that popular with the powers-that-be inside of the police department due to his penchant for getting personally involved in the cases on which he consults, ends up being a suspect when both the woman and her boyfriend turn up savagely murdered. Quickly cleared, the doctor is confronted by the real murderer, Sebastian Maddox, a brilliant killer with an axe to grind against Rinaldi. The only problem is that Rinaldi has no idea who Maddox is or why he would be his target.

Maddox goes on a killing spree that targets Rinaldi’s friends, colleagues and patients, and the doctor, who has been forbidden by the killer to contact the police, turns to a retired FBI agent, Lyle Barnes, who was once his patient, and Agent Gloria Reese to help put an end to the twisted game being played by Maddox.

From the literal bang that starts off the story to its fiery conclusion, author Dennis Palumbo keeps the adrenaline and action flowing. Head Wounds is a fine example of cinematic storytelling—not a surprise, given Palumbo’s previous work as a screenwriter. The psychological detailing of the killer’s mind also rings true thanks to Palumbo’s day job as a practicing psychotherapist. Head Wounds, possibly the author’s best work yet, is a fantastic read, and one that I already predict will be hard to beat as a favorite thriller of 2018.

"The tragedy of marriage is that while all women marry thinking that their man will change, all men marry believing their wives will never change. Both are invariably disappointed."