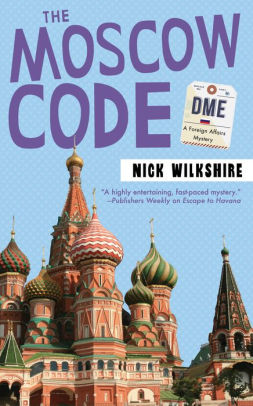 In Nick Wilkshire’s second A Foreign Affairs Mystery series, following the events of the first book in the series (Escape to Havana), Canadian consular officer Charlie Hillier is two months into a new diplomatic posting in Moscow. He’s still finding his footing, but is on his way to settling into the new job when a chance encounter and a night of clubbing with an old acquaintance lands them both a temporary stay in a Russian jail cell.

While waiting to be released (thanks to his diplomatic status), Hillier meets Steve Liepa, a fellow Canadian claiming to be held in jail on trumped-up drug charges. After promising to look into Liepa’s case, Hillier finds himself stymied by authorities in getting answers. Then Liepa is reported to have committed suicide, and Charlie’s work takes on a different dimension when he meets Liepa’s sister Sophie, a surgeon, who examines the body and claims that her brother was murdered. This sets off a chain reaction of events starting with the “accidental” cremation of the body by the Russians.

When Charlie’s further investigation finds more bodies piling up, he and Sophie work together to uncover what really happened to her brother. Hopscotching across Europe from Moscow to Berlin and France, Charlie finds himself wanted in questioning for the death of one potential witness while both he and Sophie find themselves fending off kidnapping and murder attempts.

The Moscow Code is a highly energetic read with a brisk storytelling pace that gives readers little time to relax. Charlie Hillier has his foibles, but he is an immensely likable character. The fast sense of camaraderie between Charlie and Sophie feels natural rather than forced, and readers will quickly find themselves attached to the pair. Nick Wilkshire has done what might have seemed impossible—he makes diplomatic work seem fast-paced, exciting, and a little unnerving. I can’t wait to see what he and Charlie Hillier do next.