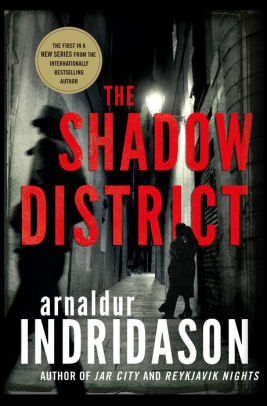 The first in his new Reykjavik Wartime Mystery series finds Arnaldur Indridason in fine form as he unspools two concurrent but intertwined tales (translation by Victoria Cribb) of Icelandic murder, one set in the present day and the other set just before the Allied forces invade Normandy in 1944. When the body of an elderly man is found in his apartment, it is quickly assumed he died of natural causes, but the fact that he was murdered is revealed soon after. Understaffed, the detective on the investigation lets Konrad, a retired detective, look into the case on his own. They need to discover who the man is and why someone would have wanted him dead. But once the man’s identity is established, Konrad learns he has a surprising connection to the victim and a related crime from decades earlier.

That case involved the body of a woman found dead near the National Theatre of Iceland. Flovent, a detective from the then-fledgling Criminal Investigation Division, aided by a military police liaison named Thorson, is tasked with solving the murder. Along the way, they uncover another similar murder in a different part of Iceland and events soon grow larger than either anticipated.

But how do the past and present combine together? Who is behind each murder and why? Will there be any real justice?

Konrad is a well-rounded and interesting protagonist whom readers will want to learn more about in future installments of the series. There’s his somewhat contentious relationship with his devoutly communist sister and the fact that he is haunted by the unsolved murder of his criminal father decades before. Not to mention that the detective has (for better or worse) a quirky affection for Icelandic pop music.