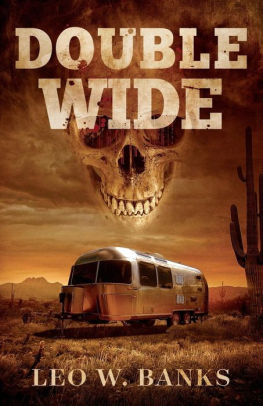 There are no eclipses in Leo W. Banks’ Double Wide, other than in the dark side of the human heart, yet this tale of a washed-up pro baseball pitcher living in a 1977 Airstream trailer in the Arizona desert is filled with wit. His career long tanked, Prospero “Whip” Stark stays financially afloat by renting out space in Double Wide, his small, self-owned trailer court. One morning someone leaves an amputated human hand in a box on the Airstream’s doorstep. By studying the tattoos on the hand, Whip realizes it belongs to pitcher Rolando Molina, his onetime catcher and longtime friend. The day gets even worse when Whip comes across a dead man near Paradise Mountain, one of the major routes for the area’s drug traffickers as they make their way from Mexico into the US. But the dead man is a stranger, and he has both his hands. Probably a drug mule, Whip figures. Deciding to let the authorities deal with the problem, he commits himself to finding the rest of his friend Rolando. The plot of Double Wide delivers a lot of drug cartel, baseball, and agave cacti information, all of which is interesting enough. But where Double Wide really shines is in its characters. Softhearted Whip is a novelist’s dream protagonist: a once-famous sports figure who is now perfectly content to spend his time rescuing downtrodden drunks, teenage runaways, and women who are no better than they should be. While some of the book’s other characters may be a bit over-the-top, such as the hard-drinking TV anchorwoman, few readers will mind because they are all so much fun. My personal favorite is Whip’s father, a once-renowned college professor who may or may not have murdered a prostitute while in the throes of his heroin addiction. The loyal Whip makes a weekly 200-mile round trip to visit his jailed father while he awaits his trial. By the end of the book (I’m not giving anything away here) Dear Old Dad is still in lockup. But that’s good news, because maybe Whip can spring him in a sequel. I certainly hope so, because the half-hilarious, half-somber Double Wide is so good it could bear at least one sequel. Maybe even a dozen.