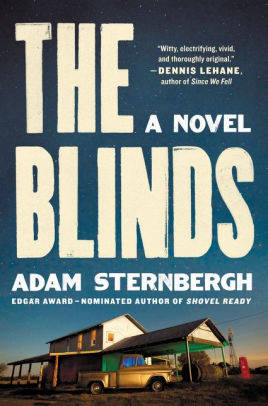 Welcome to Caesura, Texas. A flyspeck town in the middle of Texas’ Tornado Alley, it is one hundred miles from anywhere, a fact that makes it the perfect place to stash people in the witness protection program. The citizens of The Blinds, as the town is known by its occupants, are all either criminals or victims of crimes so heinous that they needed to enter the federal WitSec program.

In Adam Sternbergh’s thriller, the catch to this new life in the middle of nowhere is a revolutionary scientific procedure that wipes out the specific memory or memories that got one to Caesura in the first place. You know you did or saw something, but you can’t remember what it was. You pick a new name, and live out the rest of your life hiding out from whatever it was that put you on the run.

But when a murder follows closely on the heels of a suicide, the calm way of life for everyone is upset. Sheriff Calvin Cooper, one of only three people employed by the people running the town, is charged with investigating the death. But how do you investigate someone when you don’t know who anyone really is? Could they have been killed by another resident? Was the town’s security compromised by an outsider?

The killer is revealed rather early in the story, but the murder becomes less important as things quickly spiral out of control in much more interesting ways. Confronted with a threat to their lives and safety, how will townspeople react, especially given that none of them really know what they might be capable of?

From Intake Day, when new people move to the town, to the descriptions of everyday life in The Blinds, Sternbergh walks readers side by side with his characters down Caesura’s streets: the heat of the Texas sun, the relative boredom of the never-ending repetition of life in isolation. In testament to the author’s skill, the large cast does not overwhelm, and through adept characterization, we still feel as if we like many of them, even after their dark origin stories come to light.

A stunning finale brings the story to a shattering end as truths are revealed, and lives are lost or irrevocably changed for better or worse. No one is spared from the onslaught of change coming their way and The Blinds asks the question: Just how useful are scientific advances when neither the people in charge of the technology nor those subjected to it can be trusted?