Books
The Daughter of Sherlock Holmes 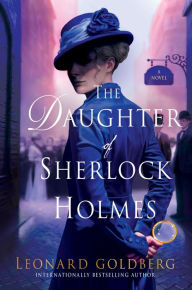 The Daughter of Sherlock Holmes is an entertaining and satisfying Holmesian tale set in 1910 London. Sherlock Holmes is dead and Dr. Watson, still residing at 221b Baker Street and holding tight to the memories of his late friend, is approached by Mary Harrelston. Mary’s brother Charles, heavily in debt to the gambler Christopher Moran, fell to his death from the window of a high building. Charles’ death is ruled a suicide by Scotland Yard, specifically Inspector Lestrade—son of the original Inspector Lestrade—but Mary has her doubts.

Dr. Watson shows a keen interest in the case when he learns two of the witnesses to Charles’ plunge are the widow Joanna Blalock and her 10-year-old son Johnnie. The Blalocks’ account of the incident is much different than the other witnesses and casts doubt on Lestrade’s assurances it was suicide. Joanna shows an alarming talent for drawing accurate conclusions from the seemingly mundane, and Johnnie is an image of Sherlock Holmes. With the help of Dr. Watson’s son, John Jr., and Joanna, Dr. Watson sets out to prove Charles’ death was murder.

The Daughter of Sherlock Holmes is a nicely rendered tale that will appeal to Sherlockian readers of all shades. The language and settings are faithful to Arthur Conan Doyle’s original stories. John Jr. acts as narrator, rather than Dr. Watson, and Joanna is an alluring replacement for the great detective. The mystery is not who killed Charles, but rather the how and why of his murder. It includes a favorite classic Holmesian device, a cipher, that acts as both significant clue and hurdle for the detectives. The rigorous, well-placed clues, an unexpected and satisfying climactic twist, and the likable Joanna make this a welcome addition to the Sherlock Holmes world.