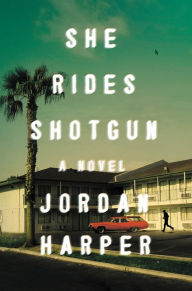 She Rides Shotgun is Jordan Harper’s powerful, disturbing, and violent first novel. Polly McClusky is an 11-year-old, fearful, and friendless girl (except for a teddy bear who accompanies her everywhere) and with, as her mother tells her after a few drinks, her father’s gunfighter eyes. Awaiting her mother after school, she is approached by a man she knows, but hasn’t seen since she was six. Her tattooed father Nate with muscled arms and hard eyes is supposed to be in prison, but instead he is at Polly’s school. Polly wants to shout, to run, but she meekly follows him to his decrepit car, gets in, and with horror in her heart lets him take her away.

Nate made powerful enemies in prison. A death warrant from the Aryan Steel, a prison gang with muscle both in and out of the cell blocks, follows him to the streets. A death warrant is issued for not only him, but also for Polly’s mother—and Polly. Trying to protect Polly, Nate takes her from school and does the only thing he knows. He pursues his hunters, the Aryan Steel, to cause as much damage as he can first.

She Rides Shotgun is a dark, at times ugly novel that is as much about redemption, both Polly’s and Nate’s, as it is about violence and fear. Its style is a kind of hardboiled poetry with a varnish of noir-like attitude. Noir-like because its hopeful theme of redemption—Nate’s hope for Polly and the ultimate redemption of both—lifts it from the nihilistic darkness of pure noir. She Rides Shotgun is a novel that is both repellent and alluring. And a novel that is wonderfully absorbing and disturbingly human.