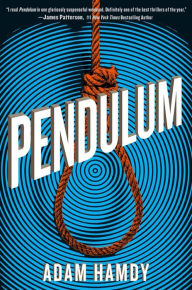 Waking up disoriented in a London flat might not be much of a unique experience, but for the disgraced ex-war photographer John Wallace that confusion quickly gives way to terror when he realizes that he’s tied up and someone is trying kill him by hanging him in his own apartment.

In Adam Hamdy’s captivating thriller, Wallace gets a reprieve from this death when the beam he’s hung from collapses. But once making his escape from the flat and the killer, he ends up locked away in a mental hospital. A solitary figure, Wallace has no one to turn to when the doctors and Detective Sergeant Pat Bailey disbelieve his story, thinking instead that he was trying to commit suicide. Another attempt on his life allows Wallace to escape the hospital and he brings his photographer’s eye for detail to investigating why someone wants him dead, and soon turns up similar types of murders.

He follows the killer’s trail to New York and is eventually paired with FBI field agent Christine Ash. She initially doesn’t believe Wallace’s story either, until more bodies start turning up. Why someone wants him dead is just one of the many questions that Wallace and Ash need to answer in order to stop the killings and put a name to the murderer.

Hamdy has a deft touch with the characterization of John Wallace. He creates a believable person to square off with the murderous adversary, yet smartly gives him all-too-human flaws that are not overshadowed by his baseline abilities. Even more importantly, the story’s villain is not a cardboard cutout. When the method to the killer’s madness is revealed, it makes sense even though you don’t agree with the actions taken. The story’s action sequences show a keen attention to detail as well.

The first in a planned trilogy, Pendulum has a lot of material left to work with despite ending in a grimly satisfying manner.  A strong cast of characters and the author’s ability to engage the reader with  an engrossing and invigorating plot  whet the reader’s appetite for more.