“It is surprising that Mr. Gould lived long as he did, in view of his character.”

Books
If We Were Villains 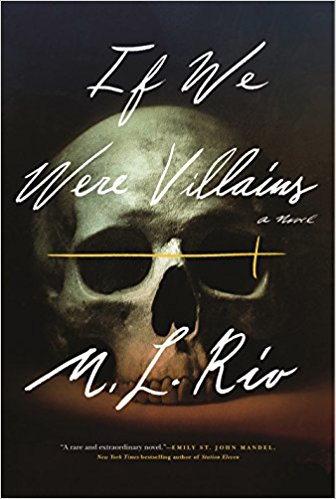 Shakespearean drama and murder become reality when a group of actors at an art school are questioned over the suspicious death of their colleague, Richard. One of the actors, Oliver Marks, is convicted of the death and spends a decade in prison for manslaughter. The day he is released, the detective who’d been in charge of the case comes to see him. Detective Colborne has always had lingering questions about what really happened 10 years ago and asks Oliver to tell him. What follows is Oliver’s recollection of the events that culminated in Richard’s death and Oliver’s imprisonment, revealing for the first time the hidden secrets and dangerous lies of the tight-knit group of young, ambitious theater friends.

M. L. Rio’s debut novel pulls the reader in from the first page with an air of mystery and questions about what Oliver knows. The group of actors range from the seductive Meredith to volatile Richard, from gentle, quiet Wren to free-spirited Alexander, whose roles on stage match those in their real lives. But when Richard begins to lash out at his fellow actors over a change in roles—and then turns up dead—the friends find themselves in the most challenging performance of all: hiding the truth of Richard’s death from the police and from their own consciences.

If We Were Villains is a well-written and gripping ode to the stage, with a dose of theater terms, Shakespearean allegories, and dialogue sometimes written as script. While anyone could enjoy this mystery about the dark side of friendship, love, and the unintended consequences when people step out of the “roles” they take on in real life, readers with a basic knowledge of Shakespeare and the theater will get more from it.

As Oliver tells Colborne what really happened, he confronts the past and his role in the scandal so he can move on with life outside of prison...and free himself from the mental prison that keeping secrets has kept him in for 10 years. A fascinating, unorthodox take on rivalry, friendship, and truth, If We Were Villains will draw readers in and leave them pondering the weight of our biggest actions and their consequences. Recommended.

"The air coming in at the window made you gasp for more when what you really wanted was less."