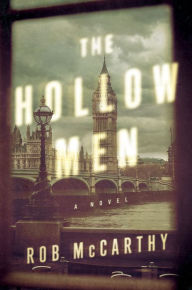 The first installment of a planned series from debut author Rob McCarthy, The Hollow Men introduces readers to Dr. Harry Kent, a former army doctor who now works as a police surgeon for London's Metropolitan Police and as a doctor at John Ruskin University Hospital.

The book opens with Kent called to the scene of a hostage situation where a teenage perpetrator is holding eight people in a restaurant. Kent is asked to medically assess the teen, but is left with far more questions than answers. When an attempt on the teen’s life is made while he is under Kent's care at the hospital, the doctor's concern for his patient leads Kent to begin his own investigation, which eventually unearths a massive medical conspiracy.

The doctor is a man from a hardscrabble background, whose time in the military has left him troubled, mostly adrift from others in his life, and naturally distrustful of the law for which he works. And while the majority of the supporting cast are here simply to propel the story along, Detective Inspector Frankie Noble lives up to her surname as an ally to Kent as he fitfully investigates the circumstances behind his patient's desperate actions.

The Hollow Men is mostly told within a compressed time frame of just a few days, which helps to create a palpable sense of tension throughout the book. It is extensively detailed with police procedures and medical jargon (neither of which overwhelm the plot), and the realism and pace effectively draw the reader into the story. The twists and turns of the story and Kent's stubborn determination to care for his patient, regardless of personal cost, make for a compelling start to McCarthy's new medical thriller series.