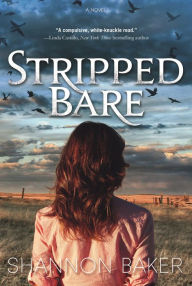 Cattle rancher Kate Fox loves living with her husband, Ted, and her orphaned niece, Carly, in the Nebraska Sandhills. But her world is upended when a neighboring rancher is killed and her husband is shot, possibly paralyzed, and accused of the rancher’s murder. And then her niece disappears.

Two factors elevate this murder mystery and add to its unique appeal: winning characters and a stunning setting. Shannon Baker populates Stripped Bare with a myriad of eclectic characters who add a good bit of humor to the story, such as Kate’s artistic and possibly manic mother, her stoic father, and her eight protective siblings, as well as a mother-in-law who hates her, and her husband’s lover, Roxy, who is his alibi for the time of the murder.

The austere setting of the Nebraska Sandhills is the perfect backdrop to the crime, as cattle ranchers and developers battle over who has a right to the murdered man’s land. Desolate and lonely, it echoes Kate’s isolation as she tries to not only find a murderer, but to find a reason why her life has been so callously torn apart.

Kate is a strong protagonist, and her no-nonsense attitude and sense of humor keep the story fairly light—some of the best passages in the book are those that team her with Roxy, who is also trying to prove Ted’s innocence, and who is largely clueless as to why Kate could possibly hate her when they both want the same thing—her man. At times, it is astonishing that another murder doesn’t occur.

The ending is gratifying, though it does not tie everything up as neatly as one might expect. It leaves room for Kate to take on another challenge, and I’m looking forward to watching her wrangle whatever comes next.