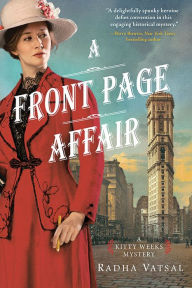 In A Front Page Affair, the first novel of a new mystery series, Radha Vatsal introduces readers to an intelligent, resourceful heroine. It is 1915 in New York City. The First World War is in full swing, and the United States is under increasing pressure to abandon its neutrality. Nineteen-year-old Capability “Kitty” Weeks is a reporter for the Ladies’ Page of the New York Sentinel, but she has bigger aims than stories about parties and fashion. Her chance arrives when, while covering the story of a swank Fourth of July party, one of the less-liked guests is found murdered. Kitty’s evidence from her own reporting fails to add up with the police findings, leading her to pursue her own investigation. Along the way, she learns more about politics, war, and hidden pasts.

Vatsal has taken great care to authentically re-create Kitty’s world. The novel contains real news articles from 1915, passages from books popular at the time, and actual quotations from historical figures such as President Woodrow Wilson and the female philanthropist Anne Morgan. Kitty faces stringent societal rules about gender roles and equality, and, as a young woman, is often seriously underestimated by others. Discrimination toward women working “men’s” jobs or demanding suffrage is a big theme. Kitty’s determination to not let ignorance stop her is inspiring, and her independence is admirable.

The novel builds a good amount of suspense with some well-placed shocking moments. Several subplots add additional depth to other characters, such as Kitty’s feminist friend Amanda Vanderwell, who is training to become a nurse for the war effort, and Kitty’s father, Julian Weeks, a wealthy businessman who becomes quite secretive about his ventures. This is a well-thought-out mystery novel, combining historical fiction and feminism with a determined and brave protagonist ready to chart new mysteries and new paths for herself.