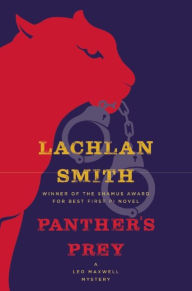 Lachlan Smith’s fourth Leo Maxwell mystery (after 2015’s Fox Is Framed) finds the San Francisco lawyer working as a public defender. When the book opens, Leo and his co-counsel, Jordan Walker, are in court defending Randall Rodriguez on rape charges. Rodriguez has autism, schizophrenia, and a long history of false confessions, so Leo is relatively certain he’s innocent—until near the end of the trial, when the man’s strange behavior sows doubt. The jury acquits Rodriguez, though, and an affair with Jordan helps push Leo’s misgivings to the back of his mind.

A week later, Jordan is found murdered and the circumstances leading to her death bear a strong resemblance to the crime for which their client was just tried. Rodriguez is arrested and confesses, but there’s no physical evidence linking him to the scene. Leo wonders whether he inadvertently paved the way for Jordan’s murder by freeing Rodriguez or if there’s a serial rapist at large in the city. A forced leave of absence gives Leo the time to investigate, but in trying to uncover the truth, he draws suspicion to himself.

Longtime readers of Smith’s work will find much here that’s familiar; many of the complications facing Leo in Panther’s Prey stem from the events of previous books. To call Leo’s backstory complicated would be an understatement, but Smith does his best to make his latest accessible to the uninitiated, and he (mostly) succeeds.

Smith’s prose is smart and stylish. The central mystery is breathtakingly complex; feints, twists, double crosses, and red herrings abound. And what at the outset feels like a highbrow procedural settles into the rhythms of a gritty detective novel after just a few chapters. Leo transitions from courtroom gladiator to down-on-his luck gumshoe without breaking stride, and legal proceedings and law offices quickly give way to blackmail, beatdowns, and seedy hotel rooms. The result is an intricately plotted, adrenaline-fueled tale that intrigues from page one, and ends with an epilogue that will leave fans hungering for Leo’s next misadventure.

“A prompt man is a lonely man.”

MysteryScene “Hitchcock and the Censors” by John Billheimer - “The damage done to his early American films can never be undone.”… https://t.co/OhEwDGU207
13m • reply • retweet • favorite