"Beauty draws me with a single hair if it is blonde enough."

—Tommy Hambledon, They Tell No Tales, 1941, by Manning Coles 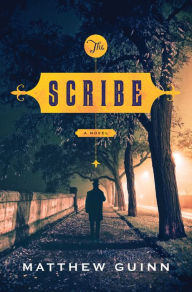 Set in Atlanta, on the eve of the International Cotton Exposition of 1881, this richly detailed novel from Matthew Guinn (The Resurrectionist) packs quite a punch. The Scribe introduces Sheriff Thomas Canby, born in the South but raised culturally Irish, thanks to his schoolteacher father. Fired from the Atlanta police force, his reputation in shambles, Canby now works in the mountain hamlet of Ringgold. An urgent telegram from his old boss and mentor, Chief of Police Vernon Thompson, summons him back to the city to catch a killer. Two black men are dead, both with a letter of the alphabet carved into their foreheads. Vernon assigns him an unlikely partner, Cyrus Underwood, Atlanta’s first black police officer. Cyrus might be free by law, but “The Ring” of wealthy white businessmen who really run the town make sure he knows his place.

Author Guinn skillfully drops us into an Atlanta struggling to embrace the modern machine age, yet unwilling to let go of its plantation past. As the murders progress from black entrepreneurs to anyone in the way, Canby is encouraged to think the killer is some “crazed Negro,” but evidence begins to point in a direction The Ring is uncomfortable with. From tiny details like the chiming of a pewter bell that summons a servant to his master’s bidding, to the “salon” of childhood friend Mamie O’Donnell where the races have no problem mixing, the chapters jump with the life of the times.

Canby is a complex figure, worthy of another book, while Underwood elicits empathy as he balances his life on a daily tightrope of racial tension. Other outstanding characters are Julia, the courageous teacher Canby loves; Leon Greenberg, Jewish owner of a pencil factory who pays a terrible penalty for being a foreign Yankee and arrogant businessman; and Colonel Billingsley, a man determined to bring electricity to Atlanta. This book is angry, philosophical, and vastly entertaining. You can feel Atlanta, the elegant city destroyed by General Sherman and his troops in the Civil War, struggle to represent the New South—one focused on the future but still dragging the past behind her.