"There's no place in a PI's life for impatience, faintheartedness, or sloppiness. I understand the same qualifications apply for housewives." 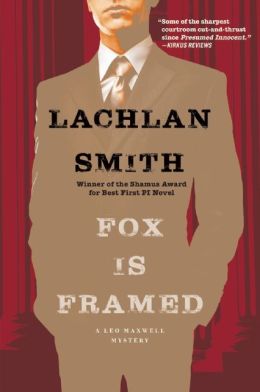 The third installment in the series featuring attorney Leo Maxwell reveals much of Leo’s backstory. It opens with ten-year-old Leo’s memory of discovering his mother’s dead body. Unlike his brother Teddy, Leo always thought his father Lawrence guilty of her murder—and indeed, his father has been in prison for it for over two decades. But his father’s case is under review for prosecutorial misconduct and it seems as though he’ll be released. Leo finds himself going, for the first time, for a jailhouse visit.

In the hands of a lesser writer, there would be a gooey father and son reunion, a realization on the son’s part that his father was never guilty, and all would be forgiven as the reunited family walked out of prison into the happy sunshine. That’s not what happens here. This book never took me where I expected it would. The story is smart, complex, and original. It is the first Leo Maxwell book I have read and the storytelling proved to be so clear and concise I was never at a loss as to who was who or just what was going on.

Leo learns that Lawrence has a fiancée named Dot, and that he wants Leo to tell her of his pending release. Leo reluctantly goes to meet Dot, a motorcycle-riding nurse who is not at all what Leo expected. When his father does get out, he heads to Teddy’s with Leo and Dot, where a granddaughter he’s never met awaits him. Teddy also works as a lawyer, but not in the courtroom since a recent head injury has reoriented him as a work-from-home family man. Lawrence is delighted with his granddaughter and the family reunion really got me emotionally hooked into the story.

This is truly a legal thriller, much of it set inside a courtroom, told by someone who knows the way things work there. It’s left to the reader to interpret what’s happening, and it is almost like being a member of the jury yourself. All the while, Smith keeps the reader on edge. You hope Lawrence is innocent, but you are never really sure. And when a new crime turns up that incriminates him once again, you won’t know what to think. Smith lets you make up your own minds as he relentlessly unfurls his story, one in which every character has a little bit of heartbreak to share. The characters got me hooked, the legal story got me to stay, and the originality of the telling stuck with me when I was finished.

"My pictures always seem to be filmed in places that I can't pronounce."
—Roger Moore, Screen International, 1980

MysteryScene Inspector Richard Jury has a new friend in THE OLD SUCCESS by Martha Grimes. He'll need all the help he can get wit… https://t.co/2FO1MOK4K4
22h • reply • retweet • favorite