“If work was a good thing the rich would have it all and not let you do it.” 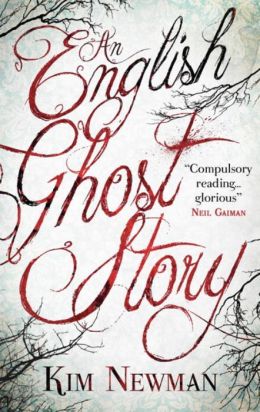 Seeking a new start after an extremely rough patch, Steven and Kirsty Naremore decide to move their family (sullen teenage daughter Jordan and rambunctious younger brother Tim) to the country. Falling in love with a property known as the Hollow, they quickly move in. At first, the Hollow, which is known for being haunted, seems to return their love. The Naremores, however, have a dark side, and their faults, weaknesses, and prejudices soon bring about a radical change in the atmosphere of their once idyllic home, as certain hostile entities within seize the chance to turn their lives into a living hell.

Although structurally similar to many a classic haunted house story (comparisons to Shirley Jackson’s Hill House are apt), An English Ghost Story also works as a thriller because of the Hitchcockian magic author Kim Newman works via his pitch-perfect prose, letting the audience in on the impending disaster early on in the narrative; readers know something bad is coming, but, importantly, don’t know when. So, when horrific things do start to happen, it is both a surprise, and, in a strange way, a relief. A consummate storyteller, Newman holds his readers spellbound from the first page to the last.