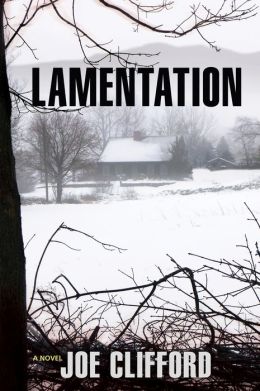 When it comes to bleak and grim, Joe Clifford’s Lamentation is right up there with Nordic crime fiction, because the February weather in northern New Hampshire—where Clifford’s book is set—adds to the novel’s sharp edge. Protagonist Jay Porter scratches out a living “estate clearing,” packing up the remainders of other people’s lives. Meanwhile, his ex-girlfriend Jenny has moved in with former biker Brody, who is now playing father to Jay’s young son. Jay’s personal life is already messier than the estates he clears, but things get even worse when his drug-addicted older brother Chris is accused of murder and disappears. Usually in crime novels the protagonist is the person who solves the crime, but that isn’t quite the case here. Yes, Jay is desperate to find Chris, but mainly to keep him from freezing to death with a needle in his arm. Although technically a mystery (there is a murder and we have to wait until the end of the book to find out whodunit), Lamentation is more about codependency. Drugs kill, but the very act of loving a drug addict can be fatal, too. Rather than focusing on the present, or even the future, Jay remains chained to the past, to a time when his brother helped raise him after their parents were killed in an automobile accident. This lingering loyalty almost proves fatal to them both. Although Jay believes he’s a realist, his loyalties are to a man who doesn’t really exist anymore; Chris spreads heartbreak like a virus. But family is family, author Clifford seems to be saying in this touching, insightful novel, and we take what we can get—whatever the damage to ourselves.