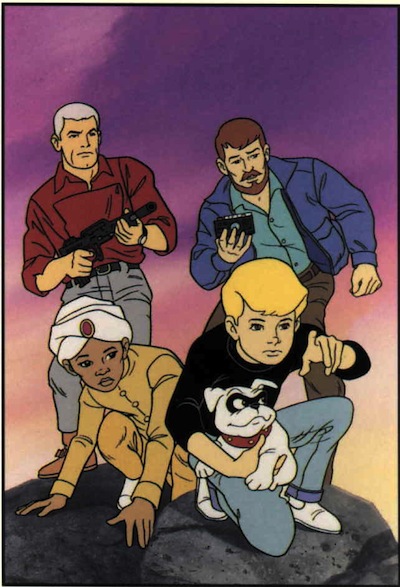 Jonny Quest redirected the course of popular cartooning. It paved the way for every action, sci-fi, and mystery cartoon series that followed. And it was one of the coolest things on the tube.

Artist Doug Wildey (1922-1994) is best remembered today for his groundbreaking work on Jonny Quest. He went on to work on a number of animated shows, including The Submariner, Iron Man, and The Fantastic Four, in the late '60s, and Godzilla in the '70s. All images © Hanna-Barbera Productions, Inc.

Television over the last half-century has offered a plethora of crime shows, suspense shows, action/adventure shows, and cartoon shows, but only one program brought all of those elements together in a single prime-time package: Hanna-Barbera’s Jonny Quest. The animated exploits of a globe-trotting 11-year-old adventurer, who battles antagonists ranging from lost-world creatures to Bondian super villains, became an instant baby boomer classic, and its influence can still be seen today.

With the recent passing of cartoon producer/director Joseph Barbera, television historians have begun to reassess the innovative work resulting from his long-running partnership with William Hanna (who died in 2001). With Jonny Quest, the team redirected the course of popular cartooning like never before. Quest was not just another ha-ha cartoon show; it was the first half-hour dramatic cartoon, the first cartoon series to feature realistically rendered characters, and it paved the way for every action, sci-fi, and/or mystery cartoon series that followed, from Space Ghost to Justice League.

On top of that, it was one of the coolest things on the tube; who didn’t want to be Jonny Quest?

The idea to try an animated action show arose after Barbera saw the first James Bond film, Dr. No, in 1962. The earliest plans were to base the show on the old radio program Jack Armstrong, the All-American Boy, with a dollop of the adventure comic strip Terry and the Pirates thrown in for good measure. Because the project required a radically different look than their other prime-time shows, The Flintstones and The Jetsons, Hanna-Barbera brought in comic-book artist Doug Wildey to develop it. Wildey’s resume, interestingly, included drawing a comic-strip adaptation of Leslie Charteris’ The Saint.

When getting the rights to Jack Armstrong hit a snag, Wildey started developing an original property called The Saga of Chip Balloo, which was eventually transformed into something called Quest File 037. In addition to being considerably less awkward, the new title cannily reflected the then-red-hot spy craze (Ipcress File/007, anyone?). As development progressed, plucky young Jonny (no “h”—it’s short for “Jonathan”) Quest took star billing. 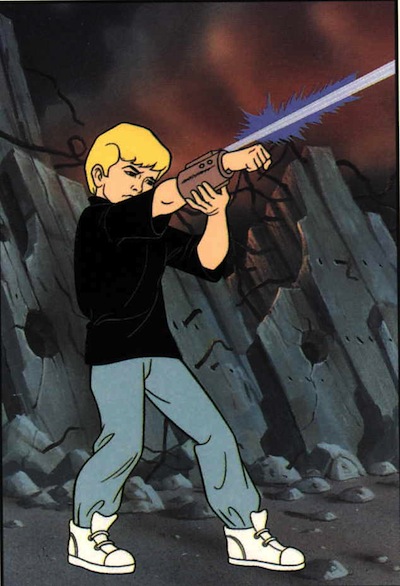 Jonny was a remarkably rounded character for a television cartoon. Brave, intelligent, precociously skilled in the operation of motorized vehicles, yet still a kid with a fun-loving, mischievous streak, he was something of a Cold War-era Huck Finn. He could think his way out of jams and even go on the offense when necessary, but he never fell into the trap of phony invincibility. Whenever Jonny was in danger, whether the threat came from a criminal mastermind, a band of sea pirates, or a living mummy, the danger was real, and we knew it. When he escaped that danger, it was through real resourcefulness and courage, and we knew that, too.

Sharing in Jonny’s adventures were his brilliant scientist father, Dr. Benton Quest; former secret agent Roger “Race” Bannon, who served as Jonny’s mentor and bodyguard; Hadji, a turban-wearing junior fakir from India, and Jonny’s best friend; and the family bulldog Bandit, who unlike most cartoon canines actually acted like a dog. The team travels the globe in a private jet, often on secret missions for the US government.

Jonny’s mom is completely off the radar screen. “I remember talk about Jonny’s mother,” veteran studio layout artist Iwao Takamoto recalled in 2006, “and Joe [Barbera] said, ‘Just ignore it, we don’t need her…besides, no mother would let her son do the sort of things that he’s doing.’”

To prove that a weekly animated series featuring realistic-looking characters could be done in the “limited animation” style pioneered by Hanna-Barbera—in which only those parts of a figure that absolutely had to move actually moved—the studio produced a short presentation film. “We couldn’t explain to anybody what we were trying to do,” Joe Barbera recalled in 1999. “I took it [the promo reel] back to New York, and it blew them out of the projection room! It had more action and more sound and that great theme…holy mackerel!”

Because of the show’s heavy reliance on plots instead of animation sight gags, its writing staff was a mix of comic-book talent, animation specialists, and live-action writers. Among the latter was Walter Black, who would go on to write for such crime shows as Hawaii 5-O, The Streets of San Francisco, and the lighthearted British series The Persuaders.

Over the course of 26 episodes, the Quest team battled bad guys and other assorted menaces in the Arctic Circle, Egypt, India, Central America, Thailand, Canada, and all points in between, including quite a few unspecified mysterious islands and nations. Their antagonists ranged from the horrifyingly real, such as Nazi war criminal Von Duffel, who showed up in the episode “The Devil’s Tower,” to the fantastical, mysterious entity made of pure energy from “The Invisible Monster.” The team’s only recurring nemesis was Dr. Zin, an evil megalomaniac and powerful member of a large international crime and terror organization, who was a cross between Ian Fleming’s Ernst Stavro Blofeld and Dr. Fu Manchu.

Jonny Quest was well received in its initial run, but it lasted only one season. The tricky logistics of translating comic book artwork to animation made it an expensive show—about $64,000 an episode—which was enough to scare its network, ABC, out of committing to a second season. It did, however, have additional life on Saturday morning throughout the late 1960s and 1970s, and in 1987 a new batch of episodes were produced for syndication. 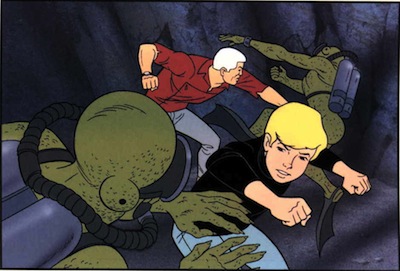 In 1996, new management at Hanna-Barbera decided to do an updated, “hipper” version of Jonny called The Real Adventures of Jonny Quest. While the result pleased no one, it did demonstrate by comparison why the original worked so well: it was fast-paced, colorful, and sensory (its wailing soundtracks were punctuated by Hoyt Curtin’s dynamic, driving jazz scores), but most importantly it was honest…and innocent. No matter how fantastic the stories or the settings were, the show was played straight, without a trace of self-conscious spoofery. Young actor Tim Matthieson (who as Tim Matheson later starred in such films as Animal House and 1941) gave Jonny’s voice just the right mix of I’m-in-trouble gravity and gee-whiz awe, and achieved the kind of retro simplicity that is impossible to replicate for today’s edgier, more cynical era.

It is hard to deny that some of Jonny Quest’s characters (particularly the foreign villains and henchmen) veer dangerously close to being demeaning stereotypes, or that the level of violence and gunplay is by today’s standards only borderline acceptable (even in 1964 it raised concerns, and was subsequently toned down). But neither can anyone deny that 40-plus years distance has done nothing to diminish the level of action, suspense, and excitement in the stories (presented in perfect three-act format), the dazzling appeal of the clean, comic-inspired graphic style, or the subtly subversive message that a youngster could be extraordinary but still be a normal kid at heart…or vice versa.